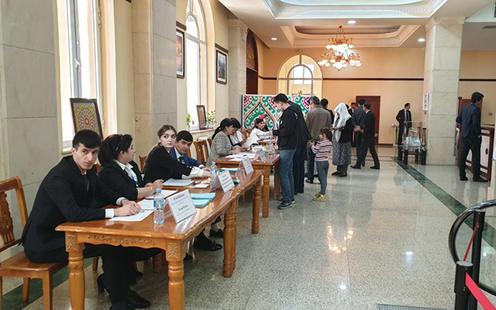 A polling station in Tajikistan . Photo from Ozodi.org

The March 2020 parliamentary elections in Tajikistan “took place in a tightly controlled environment”, a report published by the OSCE’s Office for Democratic Institutions and Human Rights (ODIHR) has concluded. “Systemic infringements on fundamental political rights and freedoms have left no space for a pluralistic political debate, and genuine opposition has been removed from the political landscape,” ODIHR writes. “Consequently, voters were not presented with genuine political alternatives.”

The report highlights that more than 240 candidates were registered for the elections, including 48 women, to contest 63 parliamentary seats. However, the Central Commission for Elections and Referenda failed to publish a complete list of candidates, thereby depriving voters of the chance to familiarize themselves with the full range of prospective deputies. Meanwhile, of the seven officially registered parties, only the ruling People’s Democratic Party of Tajikistan (PDPT) fielded the maximum number of candidates, and in many single-mandate constituencies the PDPT was challenged only by self-nominated candidates allegedly affiliated with the ruling party.

The ODIHR mission points out that, during election campaign, “none of the parties challenged the President’s policies, scrutinised the performance of the government or opposed one another”. Only the Social Democratic Party (SDPT) ventured to raise the issues of corruption, the lack of independence of the judicial system and control over the media. Media coverage, meanwhile, “reflected the lethargy of the campaign”. There were no debates between candidates. Privately-owned media outlets generally rely on information from the state-run news agency, while state television was dominated by coverage of the activities of the president. “Only a few news websites, most of them operating from abroad, some Facebook groups and blogs offered an alternative content. Authorities sporadically blocked access to most critical news websites, including during campaign, effectively depriving voters from making a fully informed choice.”

On election day, serious irregularities were observed during voting and counting, including proxy and family voting and ballot box stuffing, and tabulation of the results lacked transparency.

ODIHR advises the Tajik government to conduct a comprehensive review of the electoral legal framework, allow journalists and the media to carry out their professional duties unhindered, ensure the independence of the Central Commission for Elections and Referenda through adequate and transparent selection procedures and introduce a permanent centralized voter register. The authorities should also provide for independent, non-partisan citizen election observers and introduce robust and transparent procedures for counting votes. The report repeatedly notes, however, that Tajikistan has failed to address these and other recommendations in previous reports.

The parliamentary elections in Tajikistan took place on 1 March and involved the participation of all seven of the country’s officially registered political parties. According to the final results, 47 of 63 seats in the new lower chamber of parliament were won by members of the ruling PDPT. The Agrarian Party won 7 seats, the Economic Reform Party 5, the Communist Party 2, and the Socialist and Democratic Parties one seat each. Only the SDPT, which many people in Tajikistan see as the only real opposition force in the country, failed to make it into parliament. SDPT leader Rahmatullo Zoyirov denounced the results as fraudulent and politically determined by the president, but no official complaints were ever filed.

OSCE observers are still yet to declare a single election in Tajikistan as free and democratic and in compliance with international standards.

For a summary of the OSCE’s report on the parliamentary elections in Uzbekistan at the end of last year, click here.