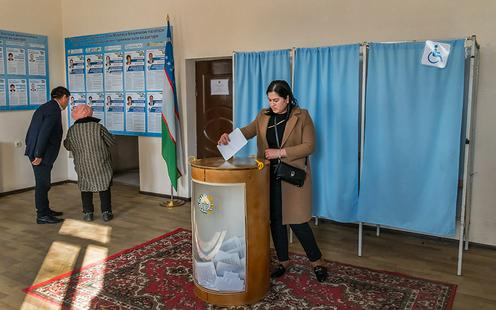 Voting during the elections in Uzbekistan. Photo by Andrey Kudryashov, Fergana

The 2019 parliamentary elections in Uzbekistan took place under improved legislation and a greater tolerance of independent views but they did not demonstrate genuine competition and full respect for electoral procedures. This is the conclusion of a report published this week by the OSCE’s Office for Democratic Institutions and Human Rights (ODIHR).

The ODIHR notes the positive changes that were introduced by the new Uzbek electoral code ahead of the elections. Among them are the abolition of reserved seats in parliament (previously, 15 seats were reserved for the Ecological Party), the introduction of a maximum deviation of 10% from the average size of constituencies’ voting populations, the removal of a total ban on voting by persons sentenced to prison terms, and allowing citizens to support the registration of more than one party (in order to compete in parliamentary elections, parties must collect at least 40,000 signatures). Nevertheless, ODIHR writes, “some legal provisions are still at odds with OSCE commitments and international good practice”. These include restricting the right to seek election to candidates nominated by political parties, and the five-year residency required for candidacy (leaders of the opposition Erk (Freedom) Party, for example, are based outside of the country).

As for the actual election-day process, the ODIHR points to a number of serious irregularities both in voting procedures and in counting. The ODIHR praised the introduction of a new nationwide voter register, aimed at preventing multiple voting, but said that failure to then publish sufficient information on registered voters led to having to allow voters to register in place on election day and thus promoting multiple voting in practice. OSCE observers also said that voters were sometimes allowed to vote without ID, were given multiple ballots and were allowed to vote on behalf of others.

Observers also reported that almost half of the observed polling stations did not follow correct counting procedures, allowing serious violations such as the interference of unauthorised individuals to interfere in the counting process, inconsistent and unreasonable determination of the reliability of votes, entering results data into pre-signed protocols, and deliberate falsification of data in the results protocols. Some local electoral commission members delivered signed protocols to the district-level commissions in which no data results had been recorded, and many results protocols were completed or changed at the district level, often without any formal decision, after 74% were adjudged to contain errors.

The ODIHR said that the independent monitoring of the elections was hindered by the fact that private organisations and individuals were not given the right to observe the election process. Mahalla committee members were allowed to observe the process, but their participation in preparing the elections and organising parties’ campaign events, and in the day-to-day life of the community, raises serious doubts about their independence.

The OSCE report makes over 30 recommendations to improve the electoral process in Uzbekistan, ten of them considered priority. These include the removal of discriminatory legal provisions against the formation and functioning of political parties; rendering restrictions on freedom of association, assembly and expression more explicit and making them exceptions only; removing the residency requirement for candidacy; and allowing parties and candidates to pursue their own campaign strategies, including organising events and designing materials as they decide. Besides this, the OSCE advises strengthening freedom of expression and access to information for the press and replacing criminal sanctions for insult and defamation with civil sanctions proportional to the harm caused; as well as granting civic associations and NGOs the right to independently scrutinise elections.

In order to increase transparency, the Central Electoral Commission should publish preliminary and final election results (by constituency) on its website as soon as possible after election day. And to reduce the risk of multiple voting, registration at polling stations on election day should be disallowed. The authorities should also “redouble efforts to eradicate the recurrent and serious problem of multiple and proxy voting” by prosecuting voters who attempt to vote more than once and local election commission staff who facilitate this, as well those who knowingly falsify election results.

During election campaigning, independent experts emphasised that there was little to distinguish the parties from one another and that they all gave expression to a very restricted range of opinions. “This is because they are not organisations that have roots among the people and express their real problems, but rather entities organised by decree from above in order to give the illusion of the regime’s legitimacy,” British journalist Joanna Lillis commented.