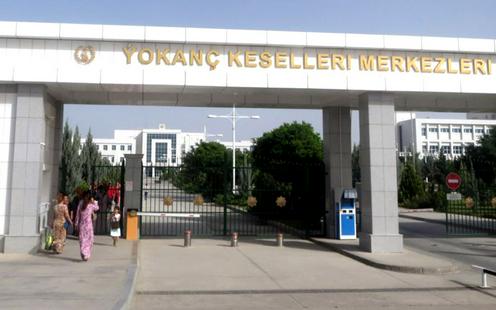 The Ashgabat centre for the prevention and treatment of infectious diseases . Photo from Azathabar.com

The Turkmen foreign ministry has responded to a statement issued by the US embassy in Turkmenistan yesterday about forced quarantining in the country. The reply has been published on the ministry’s website (Note: the Turkmen response has been published in an English version, which we quote here directly and without correcting unusual expressions or errors of grammar).

“While there are no official reports of positive COVID-19 cases in Turkmenistan, the U.S. Embassy has received reports of local citizens with symptoms consistent with COVID-19 undergoing COVID-19 testing and being placed in quarantine in infectious diseases hospitals for up to fourteen days,” the embassy’s statement says.

In response, the Turkmen foreign ministry wrote: “The Ministry of Foreign Affairs of Turkmenistan emphasizes the invalidity and partiality of such informational fakes. In this regard, the official representatives of the Ministry have repeatedly informed the Ambassador of the USA to Turkmenistan about the unacceptability of spreading biased information which is not supported by facts.” The ministry also stressed that it regularly holds press briefings about the epidemiological situation for diplomats and foreign journalists, but that “unfortunately, the American side does not take part in such meetings despite of [sic] invitations”. “Based on the above said, the Ministry of Foreign Affairs of Turkmenistan announces the counterproductive nature of the actions of the American Diplomatic Mission in Ashgabat,” the ministry writes.

The US embassy has previously on several occasions expressed reservations about Turkmenistan’s claims to be free of the coronavirus. In April a minor spat broke out between the two countries’ diplomats over $920,000 provided by the US to help with anti-epidemic preventive measures in Turkmenistan. The American side called these funds economic “assistance”, but the Turkmen foreign ministry considered this formulation incorrect and emphasised that the economic “cooperation” between the two sides was based on “mutual benefit and equal partnership”.

In contrast, the Russian ambassador to Turkmenistan, Aleksandr Blokhin, stated on 11 June that he believes the Turkmen authorities’ assurances on the absence of COVID-19 in the country. Following this, Russian newspaper Nezavisimaya Gazeta accused him of “buying loyalty” from Turkmenistan, provoking an angry response from the diplomat.

Since April, the World Health Organisation has been attempting to arrange the dispatch of a mission to Turkmenistan to check on claims that COVID-19 is yet to reach the country, but has still not been able to come to an agreement with the Turkmen authorities. On Monday Turkmen interior minister Rashid Meredov said that the visit could take place at the start of July.

The WHO found it far easier to arrange a mission to Tajikistan, which also previously asserted that it had no cases of COVID-19, despite multiple reports of increasing numbers of pneumonia patients. Tajikistan then announced it first cases of COVID-19 the day before the WHO team arrived. Earlier this month RFE/RL reported that hospitals in the Turkmen capital of Ashgabat were full of patients with pneumonia. One of the outlet’s sources close to the Turkmen government stated that Turkmen officials were getting ready to officially announce the country’s first official cases of the virus.