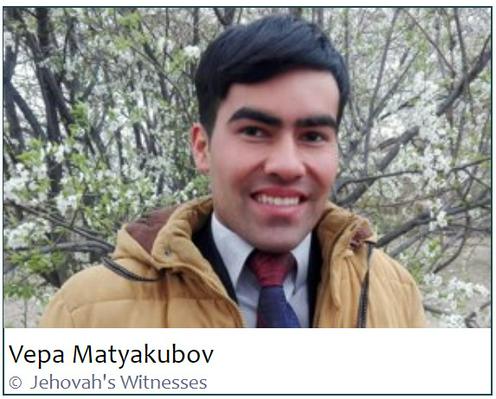 On 17 February, a Dashoguz Region court in Turkmenistan jailed Jehovah's Witness Vepa Matyakubov for two years, his second criminal conviction for refusing military service on grounds of conscience. He had offered to do an alternative civilian service but Turkmenistan does not offer this possibility. He is likely to join nine other jailed conscientious objectors in Seydi labour camp, known for harsh conditions and torture. Felix Corley, the editor of Forum 18 News Service, an agency monitoring religious freedom in the former Soviet republics and Eastern Europe, has closely followed Matyakubov’s case and the cases of the other imprisoned conscientious objectors in Turkmenistan.

On 17 February, a court in Dashoguz Region of northern Turkmenistan jailed 21-year-old Jehovah's Witness conscientious objector Vepa Matyakubov for two years for refusing compulsory military service on grounds of conscience. This is his second criminal conviction on the same charges.

Matyakubov is appealing against his conviction to Dashoguz Regional Court, though courts and prisons often obstruct such appeals (see below).

Jehovah's Witnesses are conscientious objectors to military service and their beliefs do not allow them to undertake any kind of activity supporting any country's military. But they are willing to undertake an alternative, totally civilian form of service, as is the right of all conscientious objectors to military service under international human rights law.

The sentence handed down to Matyakubov brings to 10 the number of conscientious objectors to compulsory military service known to be serving sentences. All of them are Jehovah's Witnesses (see full list below).

Including two who have been serving jail terms since 2018, 10 Jehovah's Witness conscientious objectors are known — as of 25 February 2020 — to be serving jail terms of between one and four years. Nine of them are imprisoned at the Labour Camp at Seydi in the eastern Lebap Region (see full list below).

Matyakubov is still being held at the pre-trial detention prison in the city of Dashoguz, 450 kms (280 miles) north of the capital Ashgabat. He is expected to be transferred to the labour camp at Seydi, where the other nine jailed conscientious objectors are all being held.

Turkmenistan has ignored repeated international calls, for example by the United Nations Human Rights Committee, to introduce a genuine civilian alternative to compulsory military service, to stop prosecuting and punishing conscientious objectors, and to compensate those it has punished.

The man who answered the phone of the deputy head of Dashoguz Region's Military Prosecutor's Office put the phone down when Forum 18 began to ask about Matyakubov's prosecution.

Forum 18 could not immediately reach any other officials to find out why Matyakubov was jailed and the regime is not willing to introduce a civilian alternative service.

Another Jehovah's Witness conscientious objector former prisoner, Arslan Begenchov, lodged a case to the UN Human Rights Committee in 2018 and is awaiting a decision. Other prisoners of conscience jailed for exercising the right to freedom of religion or belief – all of them Muslims – are serving far longer jail terms.

No alternative to compulsory military service

Young men who refuse military service on grounds of conscience generally face prosecution under Criminal Code Article 219, Part 1. This punishes refusal to serve in the armed forces in peacetime with a maximum penalty of two years' imprisonment or two years' corrective labour.

Criminal Code Article 219, Part 2 punishes refusal to serve in the armed forces in peacetime «by means of inflicting injury to oneself, or by simulation of illness, by means of forgery of documents, or other fraudulent ways». Punishment is a jail term of one to four years. The first known use of Article 219, Part 2 to punish a conscientious objector was the case of Azat Ashirov, while Serdar Dovletov's case was the second (see below).

From 2014, courts punished conscientious objectors with corrective labour or suspended prison terms (http://www.forum18.org/archive.php?article_id=2244), rather than imprisonment. However, jailings resumed in January 2018. 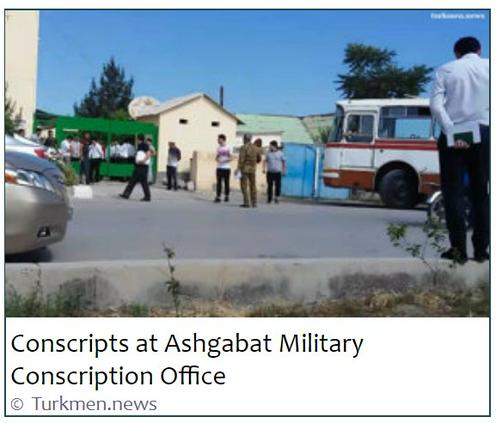 The Human Rights Committee has issued 13 Decisions in favour of 15 conscientious objectors from Turkmenistan, all of them Jehovah's Witnesses. In its most recent such Decision, published on 17 September 2019 (CCPR/C/126/D/2302/2013), it ruled that the right to freedom of religion or belief of former conscientious objectors Juma Nazarov, Yadgarbek Sharipov, and Atamurad Suvhanov had been violated by their jailing.

Nazarov  and Sharipov were jailed in 2012, and Suvhanov (for the second time) in 2013. The men had lodged their Human Rights Committee appeals in August 2013.

All three men also complained of «inhuman and degrading treatment» after their arrests. The Human Rights Committee stressed that Turkmenistan is under an obligation to make reparation to Nazarov, Sharipov and Suvhanov for the violations of their rights under the International Covenant on Civil and Political Rights, including to «expunge their criminal records and to provide them with adequate compensation. The State party is also under an obligation to avoid similar violations of the Covenant in the future».

The Committee therefore urged Turkmenistan to meets its obligations to avoid similar violations such as by changing the law, «for instance, by providing the possibility of exemption from service or alternative service of a civilian nature».

Another conscientious objector former prisoner, Arslan Begenchov, lodged a case to the UN Human Rights Committee on 20 June 2018 and is awaiting a decision, Jehovah's Witnesses told Forum 18. When sentenced in Charjew to one year's imprisonment in January 2018, Begenchov was the first conscientious objector to be sentenced to prison since 2014. (http://www.forum18.org/archive.php?article_id=2363)

Why no alternative civilian service?

Forum 18 was unable to find out why the authorities will not introduce an alternative civilian service and why conscientious objectors who are willing to perform such an alternative service, like the 10 Jehovah's Witness young men, continue to be jailed. 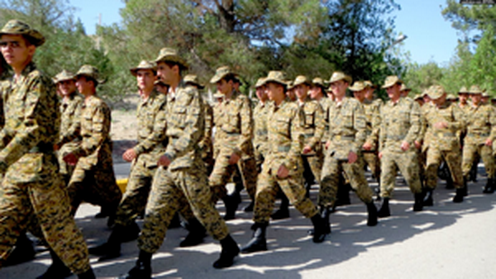 Many prisoners of conscience

The 10 jailed conscientious objectors are among the many people Turkmenistan has jailed for exercising freedom of religion or belief.

Five Muslims who met to study the works of theologian Said Nursi failed to overturn their 12-year jail terms at Turkmenistan's Supreme Court in July 2018. Four of the five are in the top-security prison at Ovadan-Depe, where prisoners have suffered torture and death from abuse or neglect.

More than 60 Muslims from in and around the eastern city of Turkmenabat were imprisoned in 2013 and after to punish them for their involvement in a Muslim study group. Most or all the prisoners are believed to be held at Ovadan-Depe. Relatives often have no information as to whether they are still alive. Three of the group are known to have died in prison.

Matyakubov's older brother Dovran was convicted and imprisoned twice for his conscientious objection to military service, in December 2010 and again in December 2012. Dovran Matyakubov was released from his second sentence under amnesty in October 2014.

A Military Conscription Office summoned Vepa Matyakubov in autumn 2019 in the first national call-up since he completed a two-year correctional labour sentence handed down in 2017. He told the Office that he could not perform military service because of his religious beliefs and said he was ready to perform a fully civilian alternative service.

Boldumsaz District Court had convicted Matyakubov in February 2017 under Criminal Code Article 219, Part 1 for refusing military service. The sentence allowed him to live at home under restrictions, but during the two years the state took 20 per cent of his wages.

Matyakubov's Indictment, dated 5 February 2020, stated that «based on an expert study» of 15 January 2020 by the government's Commission for Work with Religious Organisations and Expert Analysis of Resources Containing Religious Information, Published and Printed Production, «the religion of Jehovah's Witnesses is not officially registered in Turkmenistan».

Jehovah's Witnesses are among many religious communities of a wide range of faiths denied state registration. Their most recent unsuccessful application was in 2008.

In February 2020, Prosecutors handed Matyakubov's case to Boldumsaz District Court. On 17 February, a Judge convicted him for a second time under Criminal Code Article 219, Part 1 and handed down a two-year ordinary regime labour camp term.

The same day Matyakubov completed his appeal to Dashoguz Regional Court, which was formally lodged on 21 February, Jehovah's Witnesses told Forum 18. Appeals are lodged to the court that handed down the initial decision. That court then hands them on to the higher court.

The chancellery of Dashoguz Regional Court told Forum 18 on 25 February that it has not yet received Matyakubov's appeal. Telephones at Boldumsaz District Court went unanswered each time Forum 18 called the same day.

Matyakubov is still being held in the Temporary Detention Prison (DZ-E/7) in Dashoguz Region. He is expected to be transferred to the labour camp at Seydi, where the other nine jailed conscientious objectors are all being held.

The telephone at the Temporary Detention Prison went unanswered when Forum 18 called on 25 February.

Kerven Kakabayev, a Jehovah's Witness from Koneurgench in Dashoguz Region, was sentenced in December 2014 to two years' corrective labour, with the state taking 20 per cent of his income, for refusing compulsory military service on grounds of conscience. Soon after completing his term, the Military Conscription Office again called him up and he was jailed in January 2018 for one year. He was freed at the end of his sentence in January 2019. 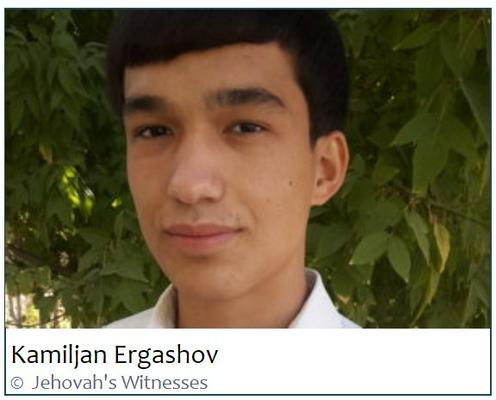 A court has rejected the appeal of the first conscientious objector to have been jailed in 2020, Kamiljan Ergeshovich Ergashov (born 27 June 2001).

Ergashov – who is from the village of Shohrat in Niyazov District of Dashoguz Region, just a few kilometres from the border with Uzbekistan — is the sole bread winner in his family.

Ergashov appealed against his conviction to Dashoguz Regional Court, but it rejected his appeal.

Following the rejection of his appeal, Ergashov was transferred from the Temporary Detention Prison (DZ-E/7) in Dashoguz Region to serve his sentence in the labour camp in Seydi, Jehovah's Witnesses told Forum 18.

Matyakubov's jailing brings to 10 the number of Jehovah's Witness conscientious objectors known — as of 25 February — to be serving jail terms. Nine of them are imprisoned at the harsh Seydi Labour Camp in the desert in Lebap Region. 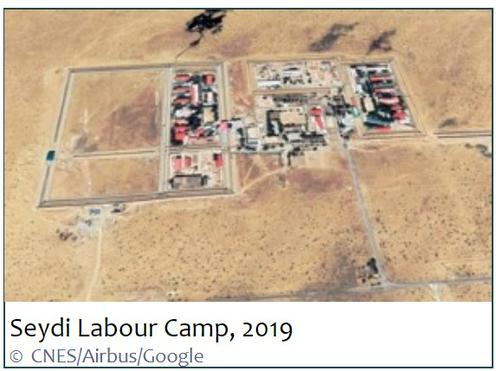 The address of the Seydi Labour Camp is:

In his complaint to the United Nations (UN) Human Rights Committee, former Jehovah's Witness prisoner of conscience Aibek Salayev complained that conditions in the Seydi Labour Camp where he was held were «inhuman».

Salayev noted that the Camp was «known for its overcrowdedness, harsh climatic conditions, scarce supplies of food, medication and personal hygiene products, and for tuberculosis, skin diseases, its very high mortality rate, and physical abuse». Officials also threatened him with rape in the Camp.

The UN Human Rights Committee ruled that the Turkmen authorities had violated the rights of Salayev and another Jehovah's Witness former prisoner of conscience Vladimir Nuryllayev. The UN published the Decision (CCPR/C/125/D/2448/2014) on 18 April 2019.