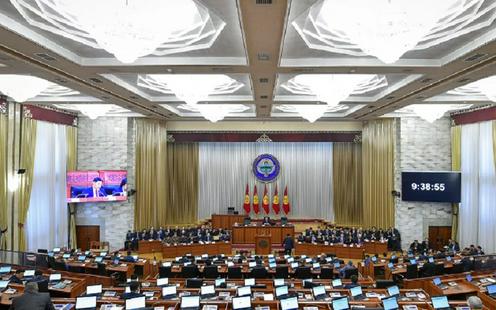 A session of the Jogorku Kengesh. Photo from the website of the Kyrgyz government

The Kyrgyz government plans to introduce an amendment to the country’s criminal laws abolishing reviews of criminal cases in instances where international organisations rule that a human rights violation has occurred. Such a provision has been discovered by the Coalition Against Torture in a draft law which has already passed through its first reading in the Jogorku Kengesh (parliament), 24.kg reports (in Russian).

The first reading of the draft law took place on 20 May. At the time, parliamentary deputy Dastan Bekeshev stated that MPs had not been given sufficient time to familiarise themselves with the amendments. “I am going to vote against, because they have not given us a chance to familiarise ourselves with the draft law. It is 24 pages long and was released only today. I haven’t even had time to read it all through,” he explained. Bekeshev also commented that the amendments were generally of benefit only to law enforcement agencies. In reply, deputy interior minister Pamir Asanov asked members of parliament to support the bill “as a concept”. Bekeshev asked Asanov if he himself had signed the document without reading it, to which Asanov did not reply.

Later, on 24 May, the chair of the parliamentary committee on law and order issues, Natalya Nikitenko, also raised questions about the bill. She pointed out that it gives the interior ministry the right to listen not only to suspects’ telephone calls but also those of witnesses. Nikitenko also noted that according to the draft law, allegations of crimes committed by investigators and prosecutors would only be registered if accompanied by evidence. The interior ministry claims that such allegations are often made simply in order to slow down an investigation. Nikitenko, however, said that she does not understand how it will be possible to ascertain that such complaints are spurious if they are not even looked into.

Now the Coalition Against Torture has weighed in on the debate. The rights defenders made the same point as Nikitenko, but also highlighted the rejection of case reviews based on the rulings of international organs. The projected amendment brings to mind the situation with respect to ethnic Uzbek human rights defender Azimjan Askarov, currently serving a life sentence on what many believe are trumped up charges. The UN Human Rights Committee has called on the Kyrgyz government to release him, but the country’s Supreme Court recently upheld the ruling against Askarov on review. Askarov has attempted to challenge the authorities’ actions through a civil action too, but in this instance too his petition was rejected.

The Coalition Against Torture also points out that the draft law makes it possible for those accused of economic crimes to effectively buy their freedom in exchange for an indemnification of losses, even without an admission of guilt. “The government thus does not hide the fact that it is using detention not in the interest of strictly lawful objectives, but for other unlawful aims,” the group’s conclusion underlines.

The Coalition Against Torture has recommended that deputies send the bill back for further work during its second reading.