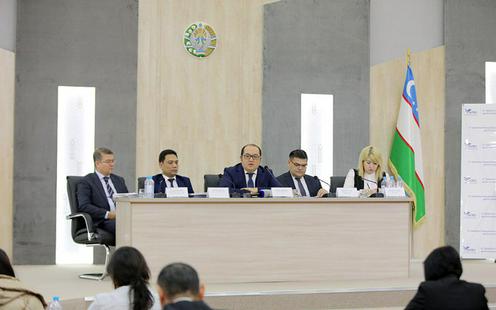 A session of the antimonopoly committee. Photo from antimon.gov.uz

Dozens of state enterprises and organisations in Uzbekistan should be stripped of their exclusive rights, benefits and preferential treatment as they have a negative impact on competition, the country’s Antimonopoly Committee has proposed in a new draft presidential decree (in Uzbek and Russian) published on 1 July.

The document and its appendices propose removing the monopoly status enjoyed by O’zmetkombinat and O’zvtortsement in the ferrous and non-ferrous metals spheres respectively, as well as that of Qishloq Qurilish Loyiha in the sphere of housing construction for military personnel, the State Committee for Roads’ companies in road construction, Davlat Belgisi in producing passports, blank copies of state documents and certificates for graduates, O’zstandart in meter readings and product labelling, the National Bank in pension and benefits payments, O’zbekoziqovqatzaxira in the sphere of fixed-price food sales to the public from government reserves, the National Guard in the provision of security services, Uz-Prista Recycling in the refinement of industrial oils, Kafolat and O’zbekinvest in the provision of insurance services, and O’zshaharsozlik LITI, Toshkentboshplan LITI and Qishloq Qurilish Loyiha in the sphere of drawing up documentation for town planning and road construction projects.

Preferential tax and customs treatment is also planned to be withdrawn from a number of firms and organisations, including O’zbekipaksanoat, the National Bank, Mikrokreditbank, O’zagroexportbank and others (a fuller list is available on our Russian site). The Committee also presented a draft law removing a ban on providing consumer credit in cash in both the national and foreign currencies and lifting a requirement for transactions at trade exchanges to be carried out only through the National Bank for Foreign Economic Activity.

Meanwhile, in a move to strengthen private property rights, President Shavkat Mirziyoyev ordered the government to draw up legislation to ensure that state organs are prevented from revising and retracting previously-enacted privatisations, stressing that such decisions can only be made by the courts.

A law banning such revisions has in fact been in place since 2012, yet many local hokims still attempt to take property out of the hands of local businessmen. After a series of scandals last year, a new administrative mechanism was introduced for the demolition of buildings owned by entrepreneurs and the expropriation of their land, according to which the final decision in such matters was to lie with the country’s prime minister. Over the last 18 months, courts have overturned 1,730 decisions made by local hokims on land distribution, demolitions and the privatization of buildings and equipment.

“Understand one thing,” Mirziyoyev warned. “Investors who are planning to invest funds will turn their attention first of all to how far their rights are defended by the court system. May it be very clear to administration heads: no one has the right to interfere in the activities of the courts.”

Since the start of 2020, around 300 state assets have been privatized to a sum of $24.4m, with investors investing a further $325m in these objects. In May, Mirziyoyev ordered the acceleration of privatization plans for a further 1,400 state assets and 500 markets. Last month, a special company, UzAssets was set up to carry out this work.

Efforts are also underway to bring as much of Uzbekistan’s extensive informal economy out into the open as possible. At the end of last month, it was announced that the State Committee on Statistics is to conduct an appraisal of the size and nature of the informal economy in the country. In order to draw economic actors out from the shadows, new specialized departments will be created in the State Tax Committee.

Other linked measures include moves to extend the scope of cashless transactions and banking services. The country’s Central Bank has been charged with integrating the Humo and Uzcard payments systems, there are moves to make QR-code payments more popular, the provision of consumer credit services will be simplified and the use of banking services promoted more generally. The idea of a nationwide amnesty for informal economy capital has been floated in parliament, as has that of obligatory income declarations.

Last year, Uzbekistan’s Ministry of Employment and Labour Relations estimated that 60% of the country’s employed population, or 7.9 million individuals, were employed in the informal sector.