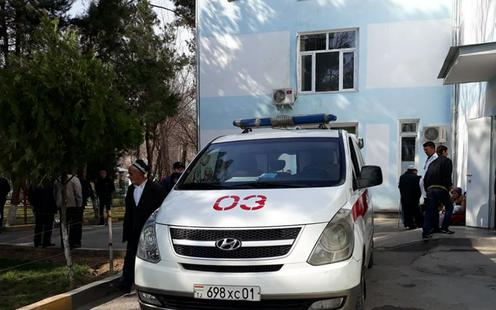 The largest national medical centre in Dushanbe, Shifobakhsh (also known as Karabolo), has discharged its last coronavirus patients and returned to its normal mode of operation, Asia-Plus reports (in Russian), citing the facility’s director Khizmatullo Shamszoda.

“Currently the number of patients coming in to us has decreased, and those who were previously admitted have recovered. On the suggestion of the Ministry of Health we have transferred our five remaining patients to the Karim Akhmadov Health Centre,” he said.

According to Shamszoda, since the start of the epidemic more than 1,250 coronavirus patients have been hospitalised at the Shifobakhsh medical centre, a quarter of Tajikistan's total.

In recent days it has been announced that several other clinics and hospitals in the city which were previously temporarily reconfigured to receive COVID-19 patients have also returned to their normal operations. Hospitals in a number of towns and districts in the Sughd region have also reported discharging their final coronavirus patients.

The Tajik health ministry has previously asserted that the country passed the peak of its COVID-19 epidemic in the middle of May, and official figures show a major reduction in the number of new cases since this time. In the last two weeks only one coronavirus fatality has been confirmed in the country. At the same time, the WHO’s new permanent representative in Tajikistan, Bakhtygul Karryeva, has stated that no country in Central Asia has yet reached its infections peak.

Current figures in Tajikistan (4,763 infections and 48 deaths) would seem to belie earlier fears that the country was set to see the worst COVID-19 outbreak in the region, after appearing to conceal virus cases in April while failing to introduce adequate prophylactic measures. In our previous story on the topic, we have noted a number of possible reasons for the low figures, chief among them continued very low levels of testing. Since the start of the epidemic, members of the Tajik public have been keeping an unofficial record of alleged COVID-19 deaths on the website kvtj.info. The list currently contains 426 names, including 64 medical workers. At the start of May the Tajik authorities blocked the site, accusing it of spreading incorrect information, since only those with laboratory-confirmed cases of the virus can count as coronavirus deaths.

One theory propounded by some healthcare workers in Tajikistan – that the country experienced its first wave of the virus in the autumn of last year – would seem to have received some potential backing from a new US study that suggests the virus may have been circulating in Wuhan from August, but remains a long-shot at this stage.

Among other unusual statistics from Tajikistan, it was reported yesterday that nearly half of the country’s COVID-19 deaths have come from the autonomous region of Gorno-Badakhshan, despite this region making up less than 3% of the country’s population. Earlier today, it was announced that 1,700 medical workers in Tajikistan have been infected with the virus since the start of the epidemic, representing 36% of all cases at the time the data was published. In the same UN country report in which this figure was cited, it is stated that Tajikistan is conducting around 450-500 COVID-19 tests per day.

Tajikistan has recently begun to ease what were already the lightest lockdown measures in Central Asia (besides Turkmenistan, which claims to be free of the virus). From 15 June all markets, shopping centre and restaurants are to reopen. At the same time, the government is sharpening requirements for Tajiks to wear face masks in public places. Fines of $11-28 will be imposed upon anyone found to be violating the requirement, while the Dushanbe authorities have announced “Operation Adolescent”, aiming to catch teenagers who flout the rules, possibly leading to administrative charges for their parents.