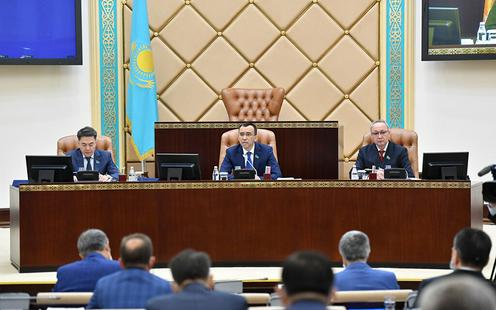 The session of the Kazakh senate . Photo from Senate.parlam.kz

The Kazakh senate has today ratified legal amendments inserting the concept of a “parliamentary opposition” into legislation and setting out its legal status, Tengrinews.kz reports.

The relevant amendments were made to the constitutional law “On parliament and the status of its deputies” («О парламенте и статусе его депутатов») and the law “On committees and parliamentary commissions” («О комитетах и комиссиях парламента».).

“The basic novelty of the new draft law is that we introduce the word “opposition” into the country’s legislation,” Mazhilis (lower chamber of parliament) deputy Azat Peruashev said at the senate session. “As you know, there was no such concept in our laws before. (...) We felt it right for there to be an opposition in parliament that will express public opinion and raise issues of concern to the population.”

Opposition fractions in parliament will be given the right to speak during parliamentary hearings and propose issues for discussion at them, and speak at senate sessions and committee meetings and at joint sessions of parliament. They will also be able to initiate discussion on topics related to improving the lives of the public.

The amendments were drawn up on the orders of Kazakh president Qasym-Zhomart Toqaev. Speaking at a session of the National Council of Public Trust in Nur-Sultan on 20 December, the head of state called for “legislative guarantees of the rights of political minorities in parliament”.

Of the six officially registered parties in Kazakhstan (a seventh, Azat, has been inactive for several years and in practice ceased to exist), only three are represented in parliament. These are the ruling Nur Otan party, the Ak Zhol party which claims to be oppositional, and the Communist People’s Party of Kazakhstan.

The current Ak Zhol party is the product of a 2005 split in the original centre-right liberal Ak Zhol party of the early 2000s, which itself emerged from the earlier reform coalition Democratic Choice for Kazakhstan under Mukhtar Ablyazov, now banned as an extremist organisation. The new Ak Zhol has long been accused of being co-opted by the government (it has been led since 2012 by the same Azat Peruashev quoted above, after he moved their directly from Nur Otan). The Communist People’s Party has been labelled by British journalist and Kazakhstan expert Joanna Lillis as a “pro-government splinter wing of the Communist Party”.

Since former president Nursultan Nazarbaev dissolved parliament in 1995 to rule by decree, Kazakh politics has been dominated by the presidency and Nazarbaev’s ruling Nur Otan party. In fresh elections in 2004, the original Ak Zhol party was the only opposition party to get a seat (one seat), which it boycotted over vote-rigging accusations. In 2012, Nur Otan won 81% of the vote, with Ak Zhol (under Peruashev) and the CPP the only other parties clearing the 7% threshold (an opposition alliance between the Azat party and the National Social Democratic Party managed just 1.7%, with NSDP leader Zhamarkhan Tuyakbay calling the election “a rubicon after which all hopes that the current powers that be can reform themselves are lost”).

In the latest parliamentary elections, Tuyakbay’s NSDP was the only opposition party still in existence, with Tuyakbay not even attempting to run himself and the party again winning no seats.

In another recent parliamentary reform, the Kazakh senate ratified a law reducing the number of members a political party is required to have in order to register from 40,000 down to 20,000.