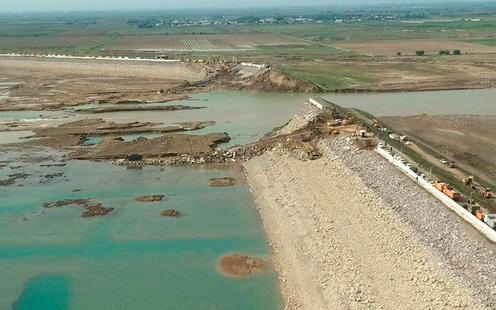 The burst bank of the Sardoba dam. Photo from Kun.uz

In an interview with the BBC’s Uzbek service, analysts at the Dutch research institute Deltares have expressed their frustration with the fact the Uzbek foreign ministry’s news agency Dunyo only cited one of the possible reasons adduced by them for the collapse of the Sardoba dam.

The report on the Dunyo website states that “in the opinion of the report’s authors, the dam burst may have been caused by an excessive water flow due to a high volume of rain, wind waves or internal erosion of the pipes”. As a result, Uzbek media outlets citing Dunyo’s report presented this as the sole cause of the accident.

However, the Dutch experts point out that the news agency omitted their further suggestion that “the dam burst could also be (in part) linked to possible faults during design or construction, and also to an absence of adequate monitoring and maintenance”.

One of the experts told the BBC that he had already contacted Uzbek officials to express his displeasure with Dunyo’s article.

The Deltares institute’s report, “A Brief Analysis of the Dam Burst at the Sardoba Reservoir in Uzbekistan” (published in Russian: «Оперативный анализ прорыва плотины на Сардобинском водохранилище в Узбекистане») was prepared on the basis of satellite images and other available information. Its authors underline that their analysis is preliminary and that a full investigation requires a more painstaking study drawing on additional data, including information on construction methods and materials used during the building of the dam.

That the dam burst was the result of unusually strong winds was, of course, the initial position taken by the Uzbek authorities. Speaking immediately after the accident occurred, the head of the state agency in charge of monitoring dams stated that the Sardoba reservoir had been under round-the-clock observation for the previous three or four days due to heavy rain and winds (this was around the time of the hurricanes in eastern Turkmenistan and Bukhara), and that initial investigations suggested that this had been the cause. Why, in this case, further preventive measures were not taken he declined to answer.

A number of other experts have instead placed the blame on systematic corruption during the construction process. Visiting the site shortly after the disaster, President Mirziyoyev vowed that “all people, regardless of who they are or what their position is, will be held accountable before the law” and investigations were opened into negligence and the violation of construction safety regulations. Yet the subsequent appointment of a man who was involved in the dam’s construction to head the official committee set up to look into the accident has not raised hopes of a transparent investigation. Mirziyoyev himself, of course, was ultimately responsible for overseeing the construction of the dam (2010-2017) during his time as prime minister. Any thought that Uzbekistan’s much-praised reform government might welcome scrutiny has been further dented by the fact that, while state TV has been busy showing images of the president confidently overseeing reconstruction efforts in flood-hit villages and praising Uzbeks for their steadfastness and generosity, reports have come in of police deleting journalists’ footage of interviews with local residents and one journalist being sacked for reporting that locals had been warned not to complain to the media.

The investigation is, however, said to be looking into a range of possible causes for the accident, including mistakes made in the design stage, the failure to observe construction regulations, and errors committed during the dam’s operation. The project’s financial records are also being delved into. It was reported today that two people have been arrested for alleged involvement in the dam’s collapse. The identities of the arrested individuals have not been revealed “in order to prevent the obstruction of efforts to establish the facts of the case”, but Gazeta.uz’s source in law enforcement agencies has named one of the suspects in the case as the man in charge of the development and exploitation of the Sardoba reservoir since September 2018 (though it was not stated if he was also one of those arrested).

One of the walls of the Sardoba reservoir collapsed on the early morning of 1 May this year, causing huge volumes of water to pour out into the surrounding countryside (for videos of the dam burst and aftermath, see here). As a result of the burst, settlements as far away as neighbouring Kazakhstan were flooded and around 90,000 people had to be evacuated from their homes. Six people are confirmed to have died in the accident and one more remains missing. Yesterday, it was reported that $100 million is to be redirected from Uzbekistan’s Reconstruction and Development Fund for the reconstruction of districts damaged by the flooding, including the building of new apartment blocks for those whose homes were destroyed.