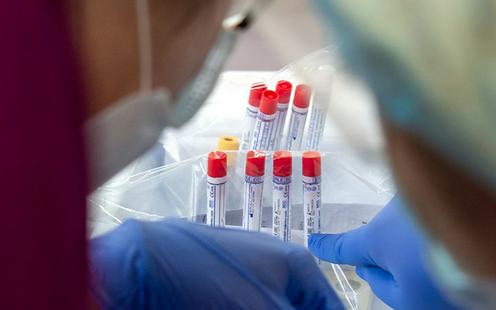 Tajikistan should be preparing for the worst case scenario in relation to the future development of the COVID-19 epidemic in the country, the WHO’s special mission to Tajikistan warned at an online press conference in Dushanbe yesterday. “The infections peak remains ahead of us, the number of patients is rising,” Asia-Plus quotes mission head Patrick O’Connor as stating, with the virus currently spreading all around the country and the number of infections doubling every three days.

The WHO mission is also urging Tajikistan to step up its current abysmally low level of testing. Currently there is only one laboratory in the country, located in the capital Dushanbe, analysing coronavirus tests, and its testing capacity is said to be a maximum of 230-250 tests per day. In an interview with RFE/RL’s Tajik service Ozodi yesterday, an epidemiologist working with an eight-man team of specialists sent from Uzbekistan to assist the Tajik authorities in the fight against COVID-19 stated that actual testing was currently as low as 100 to 150 tests per day. Given that confirmed cases have been rising at a rate of about 70-80 per day, this is quite a startling figure. The WHO mission has advised the Tajik government to arrange for testing to be carried out at laboratories in all of the country’s regions.

The Uzbek specialists have meanwhile advised the authorities to raise testing to the level of 4,000 tests per day. The Tajik health ministry, however, is currently said to have only 44,000 test kits at its disposal, provided by Russia, China and Germany. So far a total of 7,700 people are said to have been tested.

Responding to questions as to whether the WHO trusts the statistics provided by the Tajik health ministry, O’Connor answered that “the situation is changing very fast and there may be a lag in the official statistics: the information has to pass through a number of different levels before it reaches the health ministry”. The WHO mission did, however, promises to look into all reports of pneumonia deaths placed by members of the public on an independent coronavirus website, kvtj.info, set up specially for this purpose. The Tajik government has reportedly blocked access to kvtj.info inside the country.

On the question of how and when the virus might have entered the country, O’Connor said that this was a matter for future studies to determine rather than a top priority right now. Deputy Health Minister Saida Umarzoda added that, although borders with Kyrgyzstan and Uzbekistan have been closed, people did continue to cross into the country, making finding the first cases extremely difficult. In a recent article on this site, Hasan Muhibbi has suggested that the virus was probably brought to the country back in February or March, before borders were closed and air travel suspended. Domestic (i.e. tolerated) opposition leader Rakhmatullo Zoyirov, who has himself tested positive for COVID-19, argued at the end of April that the virus had already been in the country for three months. Increasing reports of pneumonia deaths in the small republic started to flood in from the start of April, yet the authorities attributed this to “unfavourable weather conditions”. The first official cases of COVID-19 were reported on 30 April, the day before the arrival of the special WHO mission sent to check on the epidemiological situation in Tajikistan.

The likelihood that the coronavirus has already spread significantly in the country is suggested not just by the extremely low level of testing in the country, but also, as previously noted, by the high number of well-known figures who have fallen ill with (or died from) COVID-19 or pneumonia, including two political party leaders, several high-ranking officials, and a number of well-known academics and writers. The latest such case, reported today, is the confirmed COVID-19 death of the famous Tajik linguist Bahriddin Kamoliddinov at 85.

While schools have been closed and major public events cancelled, much of life in Tajikistan is continuing as normal, though with far fewer people out on the streets. Yesterday, state TV reported that many members of the public were not observing recommended safety measures (such as wearing face masks in public) and showed police stopping overfull marshrutkas and asking some passengers to get out. In general, state television is focusing on good news stories of recoveries and on supplies of equipment and aid sent around the country by the personal humanitarian efforts of the “Founder of Peace and Unity, Leader of the Nation, President of the Republic of Tajikistan, the respected Emomali Rahmon” (as news readers are required to say with each new news item mentioning him).