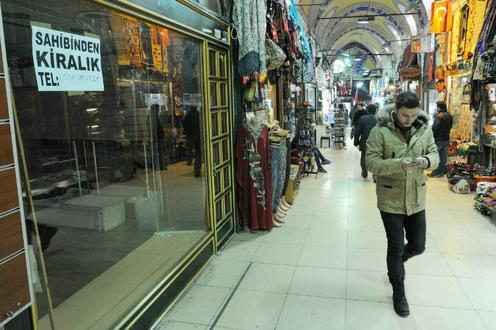 The Grand Bazar in Istanbul. Photo from Csmonitor.com

Terrorist groups have begun recruiting Turkmen citizens in Turkey left without work due to the coronavirus epidemic in the country, Turkey-based opposition figure Maksat Saparmuradov has said in an interview with Chronicles of Turkmenistan (in Russian). Saparmuradov reports that Turkmen nationals are being offered $2,000 each to cross into Syria.

Envoys of terrorist organisations arrived in Turkey from Qatar recently and withdrew funds of $2 million to recruit fighters for Syria, he claims. “Turkmen students who are studying here told me that they were offered $1,000 up front and the same amount again upon arrival. Previously, potential supporters were recruited in mosques, but now that they’re closed they work via social media to find those who have lost their jobs. Some people are being lured by promises of peaceful work in Syria and told that they’re being taken there not to fight but to clean, cook, and do household work. Of course, this is all a trick,” said Saparmuradov.

He said that Turkmens in general are not very religious and not prone to fight for ideological causes, so in most cases travelling to Syria is simply seen as a solution to their financial problems. “After the end of the epidemic, with masses of unemployed flooding the market, finding work will become extremely difficult for Turkmen citizens. In these circumstances many will turn to crime,” predicted the expert on the Turkmen diaspora.

In order to help those left in Turkey without employment, Saparmuradov calls for the creation of a special UN volunteer programme to assist those deprived of the means to take care of themselves and thought on ways of helping them find work. He also called on the Turkmen government to appeal to Russia and international institutions for help and to set up proper quarantine facilities for returning citizens, “rather than the awful tent camps we see in videos”.

Due to the coronavirus pandemic, Turkey has closed restaurants and cafés and many small businesses, and Turkmens working illegally in low-paid jobs have been fired. Turkmen migrants have said that the government of Turkmenistan has refused to organise their evacuation from abroad during the pandemic.

To date, Turkey has confirmed over 40,000 cases of infection and almost 1,000 deaths. Turkmenistan, at least according to official information, is yet to record any cases of the virus.