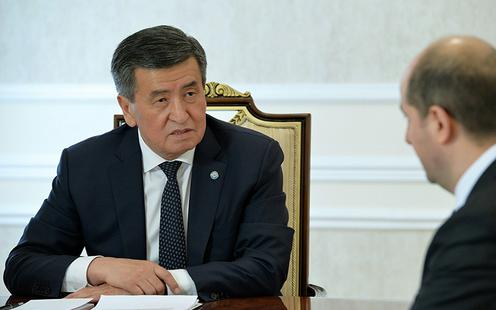 Sooronbay Jeenbekov at the meeting with Tigran Poghosyan. Photo from the press office of the President of Kyrgyzstan

Kyrgyz president Sooronbay Jeenbekov has held a meeting with the International Monetary Fund’s permanent representative in Kyrgyzstan, Tigran Poghosyan, to discuss possible financial assistance in connection with the COVID-19 coronavirus and its attendant economic crisis. The details of the meeting have been published on the official website of the President of Kyrgyzstan (in Russian).

Jeenbekov said that immediate measures are required in Kyrgyzstan in order to mitigate the economic consequences of the epidemic. Poghosyan replied that the IMF is currently looking into various potential forms of support for countries hit by the spread of COVID-19. He added that Kyrgyzstan was among the first countries to apply for emergency funding and that the request would be addressed in the coming days.

Already on 17 March, before the first official appearance of the coronavirus in Kyrgyzstan, Kyrgyz deputy prime minister Altynay Omurbekova declared that the losses accrued to the state budget due to the pandemic could reach 20 billion soms ($274 million). Stressing the seriousness of the situation, Omurbekova remarked: “Today the country is moving to a regime of economic austerity. State budget expenditure will be reduced to a minimum. All expenditures which we can presently manage without will be suspended, with the exception of protected items.”

The American international development agency USAID has already provided Kyrgyzstan with 66 million soms (just over $900,000) as well as personal protection material. The Soros Foundation-Kyrgyzstan will contribute another $100,000 to the fight against the virus. The Foundation has also delivered an IMV ventilator for coronavirus patients to the Republican Clinical Infectious Diseases Hospital in Bishkek. A special fund has been created in Kyrgyzstan for the fight against COVID-19, to to which local donors can contribute. Jeenbekov himself has donated his March salary to the fund.

Kyrgyzstan currently has 44 confirmed cases of the virus, with six patients in a critical condition. A national emergency has been declared in the country and a strict state of emergency introduced in Bishkek, Osh and Jalal-Abad and the Nookat and Kara-Suu districts of Osh region and Suzak district of Jalal-Abad region, with special emergency powers handed over to command centres run by interior ministry officials. The country’s borders have been closed and internal travel within the country has been restricted. Night-time curfews are being applied in the areas where a state of emergency has been imposed and during the day people are only allowed to leave their homes to go to food stores, pharmacies and medical facilities. Only employees of a limited number of industries and services are allowed to go to work in these zones, and many of them are reporting difficulties with obtaining permits from the emergency command centres and with the transportation of goods.

In other recent coronavirus news from Kyrgyzstan, the authorities have announced that 193 people in Bishkek were arrested for breaking the first night of curfew last night, and 320 in the country as a whole. Bishkek traffic police also announced yesterday that taxis and private vehicles used as taxis attempting to operate in Bishkek during the state of emergency will be impounded, following the inclusion of taxis in the current suspension of public transport. In Tashkent, in contrast, the authorities have introduced a simplified licencing scheme to increase the number of private taxi drivers during the current public transport ban in place there.

In Kyrgyzstan, it was also announced yesterday that all production in the areas under a state of emergency must stop, except for the production and transport of food, medical supplies and fuels, lubricants and gas cylinders.