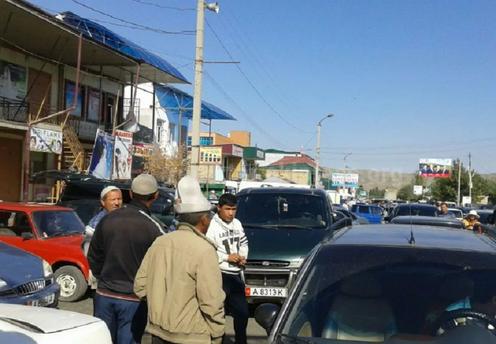 A Kyrgyz man has been sentenced to 2½ years in jail on charges of inciting discord on the internet, news site Turmush reports (in Russian).

According to the investigation, the 22-year-old man from Kadamjay district of the country’s southern Batken region had intervened to break up a fight at a market in the town of Kyzyl-Kiya, but was told to speak in the state language (Kyrgyz is designated as the state language in Kyrgyzstan, while Russian is an official language). After this, the young man posted angry comments on a popular Instagram account, complaining of being prevented from speaking in his mother tongue in public.

The Kyrgyz State Committee for National Security (SCNS) judged these comments themselves to be an incitement to interethnic discord. In December 2019, the man was tracked down and placed under house arrest. A court has now sentenced the man to a prison term, a rare occurrence for this type of case. For the time being, the man will remain under house arrest, but if his appeal to Batken Regional Court fails, he will be transferred to prison.

Linguistic and ethnic questions are fraught with tension in southern Kyrgyzstan, which has a large minority of ethnic Uzbeks. Since the eruption of interethnic clashes in 2010 in which at least 470 people died, Uzbek culture and specifically-Uzbek markers have become less visible in the region’s major town, Osh, and the number of Uzbek-language schools has dropped significantly. The charge of “inciting ethnic discord” was used against a number of Uzbek community leaders handed life sentences (to international human rights criticism) following the 2010 violence, and has been used to target those raising legitimate concerns (such as Fergana contributor Ulugbek Babakulov, who was forced to flee the country in 2017 after writing about an increase in anti-Uzbek sentiment on social media).

It is far from only with respect to the Uzbek minority, however, that the authorities have applied a strict interpretation of laws against inciting discord. Last year, for instance, protesters were charged with inciting ethnic discord for holding up a sign calling Russian president Vladimir Putin an occupier, and last month a blogger was charged with inciting interregional discord after calling people from the south of the country “backward”.