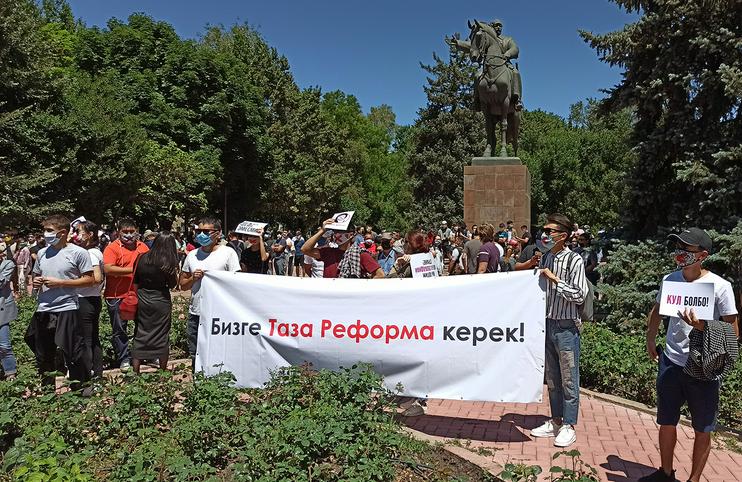 Yesterday, the peaceful protest march ReAktsiya 3.0 (“ReAction 3.0”) was held in Bishkek. Participants demanded that Kyrgyz president Sooronbay Jeenbekov refuse to sign into effect the draft law “On the manipulation of information”, more widely known as the “law on fake news”.
Lawyers and rights advocates argue that the bill effectively introduces internet censorship. Last week the Jogorku Kengesh (parliament) approved the draft law in its second and third readings, despite the presence of dozens of demonstrators outside of the parliament building and thousands of negative comments posted on the Facebook page of the bill’s author, parliamentary deputy Gulshat Asylbaeva. Protesters were further angered by the fact that procedural violations were allowed to take place during voting on the bill in parliament – several deputies cast votes in place of colleagues absent as a result of coronavirus infections or for other reasons. 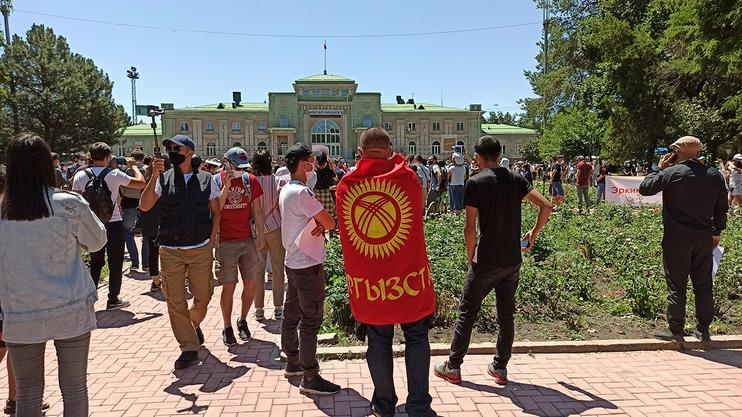 Demonstrators gathered at the Frunze statue outside of the train station. Photo by Aleksandra Melnikova, Fergana

Several hundred demonstrators gathered by Bishkek’s Frunze statue and proceeded along Erkindik Avenue as far as parliament. Protestors chanted “Gulshat, step down!”, in reference to the draft law’s author, “I’m not fake!” and “Erkindik!” (“Freedom!”).


“Kyrgyzstan should have the freest internet in Central Asia. We can achieve this. If the President signs the law into effect then it will throw us back into the ranks of totalitarian countries,” said former deputy Omurbek Tekebaev at the demonstration. Event organisers gathered signatures to send to the State Committee for National Security and the office of the prosecutor-general.
ReAktsiya 3.0’s organisers presented their protest as an extension of last year’s freedom of speech demonstrations ReAktsiya and ReAktsiya 2.0, whose participants demanded that the authorities react to journalistic investigations into the activities of the powerful Matraimov family.