Journalists attacked, obstructed during and after parliamentary elections in Kyrgyzstan 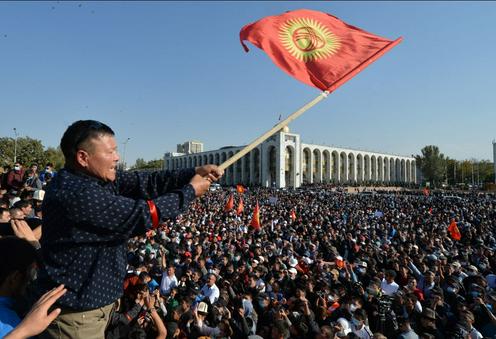 People protest the results of a parliamentary vote in Bishkek on October 5, 2020. Several journalists have been attacked during and after the elections. (Vyacheslav Oseledko/AFP)

Kyrgyz authorities should create safe conditions for members of the press covering post-election unrest in Kyrgyzstan, and stop attacking journalists who are doing their job, the New-York-based Committee to Protect Journalists said today.

Officials in Kyrgyzstan today voided the results of the October 4 parliamentary election after mass protests broke out in the capital of Bishkek and other cities. Members of several opposition parties announced plans to oust the president, according to news reports. Several journalists were attacked while covering the vote and the unrest that has followed, according to news reports and a statement today by the Kyrgyz independent nonprofit organization Media Policy Institute.

“Independent news is essential to the public during these chaotic and quickly moving events in Kyrgyzstan since the parliamentary elections,” said CPJ’s Europe and Central Asia program coordinator, Gulnoza Said. “Kyrgyz authorities should ensure journalists can work freely and safely; law enforcement must stop attacking the press and ensure that protesters don’t target journalists either.”

On October 4, two unidentified men attacked a filming crew of the independent news website Kloop in the southern city of Osh, according to news reports. As Kloop correspondent Aibike Adilet Kyzy and cameraman Khamidullo Uzakov were filming at polling station No. 5316 in a café, an unidentified man approached them, hit Uzakov, and unsuccessfully tried to take away the phone with which he was filming, while the police officers at the scene did not help the journalists, according to those reports. Later another man, who the journalists had seen with the first attacker, tried to take the phone from Adilet Kyzy, also unsuccessfully, according to those reports. The journalists filed a complaint with the Osh city police, which later detained and interrogated one of the assailants, and began an investigation into the attack as well as the refusal of the police officers at the scene to interfere, according to those reports.


CPJ tried to contact Kloop by email and through Facebook but did not immediately get a response.

Yesterday, special forces in Bishkek, the capital, shot in the direction of journalist Aibol Kozhomuratov, a correspondent from Current Time, a TV network affiliated with the U.S. Congress-funded broadcaster Radio Free Europe/Radio Liberty, who later wrote about it on Twitter and spoke with CPJ via messaging app.

Kozhomuratov said a law enforcement officer shot in his direction even though he was wearing a special reflective vest designated for media workers and was clearly in the process of filming. The bullet flew a few millimeters above journalist’s head and he “felt it with his hair,” but was unharmed, Kozhomuratov said. Current Time released a video of the shooting on Twitter.

Today, a law enforcement officer confiscated the phone of Ruslan Kharizov, a correspondent from independent news website 24.kg, while the journalist was using it to conduct a live broadcast of unrest in downtown Bishkek on the outlet’s Facebook page, according to news reports and Kharizov, who spoke with CPJ via messaging app. The officer came up to the journalist, cursed at him, told him that the unrest in the country was happening because of his filming, and forcefully took his phone, Kharizov said. He told CPJ that the officer deleted the last recording before the journalist got his phone back.

Later in the day, several filming crews, including Kharizov and crews from Kloop and Kyrgyz broadcaster 7 Kanal, were denied entry to the Dostuk hotel during an emergency session of the Kyrgyz parliament taking place there, according to Kharizov. Protesters organized to guard the entrance to the hotel and obstruct the journalists, Kharizov told CPJ.

Also today, during a live broadcast in front of Government House in Bishkek, a group of unknown men attacked Kloop’s film crew, according to Kloop, which published video of the attack on Facebook, and other news reports.

As of today, hospitals in Kyrgyzstan have admitted 686 people with injuries of various degrees, according to news reports; it is unclear if there are any journalists among them.

CPJ emailed the Ministry of Internal Affairs for comment, but did not receive a response.