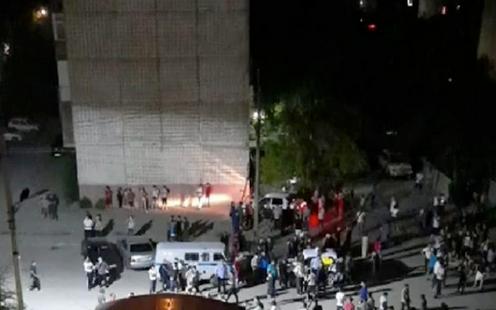 Crowds gathering outside the building where the abducted child was discovered. Photo from Ratel.kz

In the town of Satpaev in Kazakhstan’s Karaganda region, an angry crowd attempted to lynch a man suspected of abducting a five-year-old girl, Ratel.kz reports (in Russian). Town residents then spent the rest of the night conducting a “paedophile hunt”.

The young girl went missing on Wednesday 23 July, after visiting the town from neighbouring Zhezkazgan together with her family. Volunteers immediately began to scour the courtyards of high-rise flats and the surrounding steppe area in search of the small child. Children living on one of the town’s streets then reported seeing a similar-looking girl in their courtyard.

According to Tengrinews, the child’s family, together with town residents and the police, knocked on the doors of every apartment in the building, calling out to the young girl through a loudspeaker. After a child’s scream was heard through one door, police stormed the apartment around midnight, found the girl, and arrested the man who was in the apartment with her.

While the young girl was carried away to hospital, local residents repeatedly attempted to break into the apartment to mete out their own justice to the man inside. Dozens of people gathered outside the building and demanded that police hand over the suspect. Police only managed to hold off the crowd thanks to shields, helmets and body armour.

Deputy police chief Yernat Kaliakparov and imam and town mayor Askar Idrisov arrived on the scene and called on the crowd to disperse. Their calls went unheeded and people started smashing windows in the building and trying to get in through the main entrance.

“We understand that this case is appalling, but all of the building’s residents and their children are frightened,” a recording on an Instagram account devoted to local area news said, appealing to the town’s residents to remain calm.

At around 4 am, the crowd moved away from the building to the town’s police station and began demanding by loudspeaker that police hand over the suspected paedophile. Rumours began to circulate that the small girl was in intensive care.

The crowd started throwing sticks and stones at the police station and set light to several cars parked outside. The vigilantes then heard from somewhere that the station’s commanding officer was drunk and the suspect was being held elsewhere, and they headed instead for the mayor’s office. Karaganda region police department meanwhile published an announcement stating that additional forces were being deployed “to curb the disorder”. Only by the morning did the situation in the town quieten down.

At a press conference devoted to the Satpaev incident, interior minister Yerlan Turgumbaev stated that the suspect had been charged with abduction and raping a minor. The young girl herself currently remains in hospital under observation. The minister also vowed that all those guilty of violating public order would be identified and brought to justice.