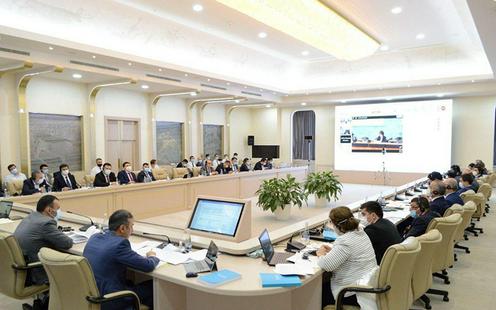 The session of the WTO accession working group. Photo from mift.uz

The Working Group on Uzbekistan’s accession to the World Trade Organisation (WTO) held its fourth session on 7 July, the group’s first for 15 years, the Ministry of Investments and Foreign Trade has announced (in Russian). Talks were previously cut off amid international condemnation of the Andijan massacre of 2005.

At the fourth session – which was held by video conference on account of the coronavirus pandemic – Uzbekistan was represented by investments and foreign trade minister Sardor Umurzakov, who presented a report on Uzbekistan’s socio-economic prospects in the event of accession to the WTO and answered questions on existing trade barriers and regulations in the country.

“As a result of the meeting, we have reached an agreement to hold bilateral talks between 20 and 31 July this year on issues related to ensuring access to markets for goods and services, as well as to proceed to the next stage of negotiations on joining the WTO, namely drawing up a Factual Summary which will serve as the basis for the Report of the working group on Uzbekistan’s accession to the organisation,» the Ministry of Investments’ statement reads.

Uzbekistan first applied to join the WTO in 1994 and subsequently participated in three working group meetings. The process was cut short in October 2005, however, following the tragic Andijan events earlier that year. The Uzbek authorities have nevertheless continued to adapt the country’s legislation in order to meet the organisation’s requirements, and in 2017 work to join it was renewed. In July of last year, Uzbekistan’s permanent representative to the UN in Geneva handed WTO director Roberto Azavedo a memorandum on the country’s internal trade regime, and this marked the start of the official process of Uzbekistan’s accession.

In other economics and trade news from Uzbekistan, it was announced yesterday that Uzbekistan has been included in the United Nations Industrial Development Organisation’s (UNIDO) Competitive Industrial Performance Index (CIP) for the first time. UNIDO describes the index as a “global manufacturing ranking based on capacity to produce and export manufactured goods, extent of technological deepening and upgrading, and impact on the world market”. Uzbekistan was placed 92nd on the list of 152 countries. Russia was 32nd, Kazakhstan 68th, Kyrgyzstan 122nd (up four places) and Tajikistan 129th (also up four). Top spot once again went to Germany, with Japan second and China overtaking the US for the first time to claim third place.

Raising Uzbekistan’s position in global rankings charts has been a key priority of Shavkat Mirziyoyev since he came to power, with the new president seeing them as the most reliable way gain attention for his reforms in the West and attract foreign investment. In June this year, he set up a Republican Council to Work on International Ratings and Indexes for this very task, following the creation of a Commission to Coordinate Work on Key International Ratings and Indexes in March. In particular, Mirziyoyev has set the ambitious target of moving 56 places higher on the World Bank’s Ease of Doing Business Index by 2022, from Uzbekistan’s current position of 76 to number 20.