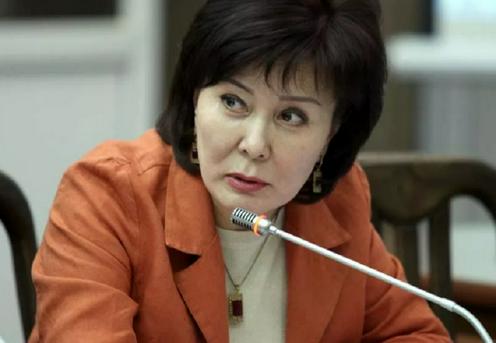 Kyrgyz internet users have bombarded the Facebook page of Jorgorku Kengesh (parliament) deputy Gyulshat Asylbaeva – author of a draft law “On the manipulation of information” («О манипулировании информацией») currently under discussion in parliament – with criticism. The bill is due to go through both its first and second readings in parliament today, news outlet 24.kg reports (in Russian).

More than 4,500 comments have appeared under a post published by Asylbaeva yesterday where she talks of current campaigns against fake news being waged by Facebook, Twitter and TikTok. The vast majority of the comments are negative and are accompanied by hashtags such as #янефейк (#Imnofake), #сдаймандат (#stepdown), #кетсин (#justgo) and similar. Asylbaeva has since been accused of deleting the comments, but replied that this was done without her knowledge by her niece.

This morning Asylbaeva put up a new post in which she asserts that the attack on her Facebook page is a clear example of the manipulation of information carried out by paid trolls. “Some users read the draft law and had relevant questions. Half of the accounts calling on people not to support the bill were anonymous and essentially just full of base insults. This is not freedom of speech! We need to think about our future and the future of our children who spend all day on social media and get their information from it,” Asylbaeva stressed. More than a thousand negative comments have already appeared under this post.

In response to the accusation of being fake, some users started to write their names in their comments, for instance “I am Nurjan Donbaev, citizen of the Kyrgyz Republic. I hereby declare that I am against the draft law”; “I am Aisuluu Ravshan kyzy, citizen of Kyrgyzstan. I declare that I am against you and your colleagues and the current government!”

Following this, Asylbaeva placed the text of the draft law on her Facebook page. The post gathered almost 300 comments in just one hour, with criticism of Asylbaeva unrelenting. For instance Facebook user Aigul Kydyrmysheva writes: “I have read your draft law (...) The government will definitely manipulate your law in order to imprison people who they or corrupt officials deem inconvenient.” RFE/RL’s Kyrgyz service Azattyk reports that around 50 protestors have assembled outside the Jogorku Kengesh building this morning.

Asylbaeva’s draft law was already criticised back in May, particularly by lawyers at the Adilet legal clinic. The organisation’s lawyers argued that key terms (including that of “the manipulation of information”) were not defined in the text. The draft law obliges the owners of websites and internet pages to check that the information published by them is reliable and in conformity with the law, yet it is not clearly explained who is to be considered the owner of a website or page. The lawyers also pointed out that introducing a ban on the distribution of false information is unnecessary since this issue is already sufficiently covered by existing Kyrgyz legislation. Those cast in a negative light in published material have the option to file defamation charges in court. And if such material is judged to incite racial, ethnic, national, religious or inter-regional enmity then criminal charges can be brought against the author.

Adilet’s lawyers conclude that Asylbaeva’s draft law gives the government the right to limit access to information which the authorities consider to be unreliable without the need for a court decision. At the same time, the bill fails to set out any clear methodology by which decisions on unreliability are to be made. “In practice, the draft law introduces state censure of information on the internet, which will affect absolutely all internet users in the Kyrgyz Republic,” Adilet writes.

Similar criticisms have been levelled this week at a Tajik draft law currently awaiting ratification by the senate. Back in March Uzbekistan introduced heavy penalties for spreading false information about COVID-19. Kazakhstan has been actively using an existing law against the distribution of knowingly false information for questionable purposes. Yesterday Kazakh activist Alnur Ilyashev was sentenced to three years of “restricted freedom” for a video and Facebook posts criticising Nursultan Nazarbaev and the ruling Nur Otan party.