US embassy says Turkmen authorities may cover up COVID-19 data 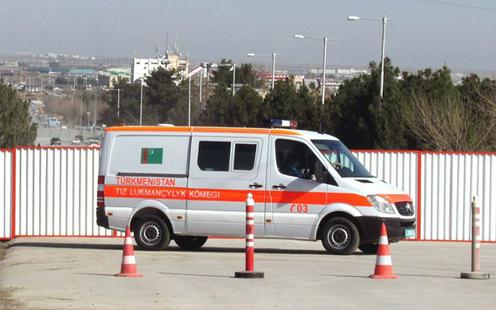 The US embassy in Turkmenistan has stated on its website that the authorities in Turkmenistan “may be disinclined” to acknowledge COVID-19 infections in the country in the event cases are confirmed. The comments were included in an update to the website’s coronavirus information on 16 April.

“Turkmenistan has not officially acknowledged any cases of COVID-19 within its borders and may be disinclined to do so if cases were confirmed,” the update reads. Travellers are advised to reconsider travel to Turkmenistan both on account of general advice surrounding the global coronavirus pandemic and “measures, including stringent travel restrictions and mandatory quarantines implemented by the Government of Turkmenistan in response to COVID-19.”

Judging by the reports of independent media outlets, however, the Turkmen authorities so far appear not to have introduced sufficiently strict anti-virus measures. Major state-sponsored events are going ahead as usual, and private events such as weddings are subject to some light restrictions but not fully banned. Even these measures can easily be violated by those in positions of power, while the general population continue to wait in long queues for scarce products outside government stores (where such products are sold far cheaper than at private stores) without any kind of social distancing.

Travel restrictions inside the country have previously been reported, as well as a major quarantine camp in Turkmenabad for all those entering the country from abroad. Precise measures, however, are difficult to determine as they are generally not communicated by the government. Fergana’s source inside Turkmenistan said on 16 April that no significant lockdown measures were in place in the country and expressed the hope that such measures would be introduced soon. He said that the public are not informed as to whether an epidemic is underway in the country or not, but that there are currently no signs of widespread illness.

Independent media outlets based outside of the country have long asserted that there are cases of COVID-19 in Turkmenistan. On 14 April, citing anonymous sources, Chronicles of Turkmenistan claimed that seven infected patients were being held in a tent in the quarantine camp in Turkmenabad. The pro-government media continue to insist that Turkmenistan is one of a handful of countries around the world untouched by the virus, thanks to the timely implementation of preventive measures by the authorities.

This is not the first instance of friction in recent weeks between the American embassy in Turkmenistan and the country’s leadership. Earlier this month, after the US embassy allocated $920,000 to help Turkmenistan fight the coronavirus, the Turkmen foreign ministry took exception to an embassy statement that the US had now provided $201 million in assistance to the country since independence. The foreign ministry described these claims as “untrue”, asserting that “the economic cooperation between Turkmenistan and the USA is implemented on the basis of mutual benefit and equal partnership”.