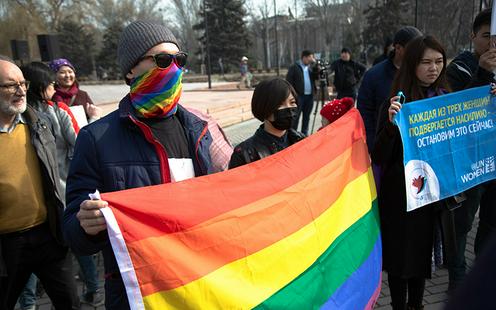 LGBT activists at the Women’s Day march in 2019§Photo from Kloop.kg

The chief of staff at Bishkek mayoral office, Balbak Tulobayev, has announced that the authorities will not allow the use of LGBT symbolism at this year’s 8 March Women’s Day march in the city, Vesti.kg reports (in Russian).

“If there are any kind of violations, any calls to non-traditional sexual relations, then we will take immediate action to stop them,” the official said. “It is supposed to be a feminists’ march, calling for the defence of women’s rights. What has LGBT got to do with it? Kyrgyz society does not accept this, so we will take strong measures against any such actions.”

One of the event’s organisers, Janna Arayeva, agreed that the sole issue on the march’s agenda was the prevention of violence against women. However, she did not rule out that some participants could be taking part under different slogans.

Women’s marches have been a yearly feature in the Kyrgyz capital, and Kyrgyz LGBT organisation Labrys has long been among the event’s organising groups. Yet for a long time, the participation of representatives of the LGBT community in the events did not provoke any widespread reaction. On 8 March 2019, women’s rights advocates once again announced their plans to hold a march, but members of the organisation Kyrk Choro, set up to defend traditional values, found out about the planned participation of LGBT groups in advance and its activists campaigned against “a gay pride parade under the guise of a women’s march”. Attempts to ban the event provoked a public reaction, following which a far larger number of people participated in the march than in 2018. Signs and banners in support of LGBT rights were also significantly more visible than at previous years’ events.