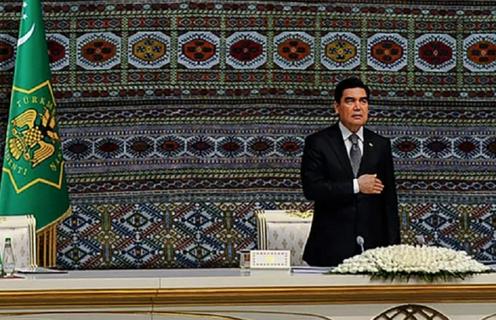 Gurbanguly Berdymukhamedov at a session of the Halk Maslahaty. Photo by Azatlyk

Former presidents of Turkmenistan will be made life-long members of the Halq Maslahaty (People’s Council), the upper chamber of the new bicameral parliament that the country plans to introduce. The new measure was included among a number of proposed constitutional amendments published by the state news agency of Turkmenistan on 24 February (in Russian).

According to the proposed changes, former presidents will automatically become members of the Halk Maslahaty, as long they do not themselves choose to forego this right. In its present form, the constitution makes no mention of the fate of former heads of state. It is merely stated that, in the event of the president falling seriously ill, his duties are to be assumed by the chairperson of the Mejlis (which currently serves as the country’s parliament, but which following previously-proposed constitution amendments will become the lower chamber of a bicameral parliament). This regulation was not, however, applied during the only previous change of president in Turkmenistan’s history. When the country’s first president Saparmurat Niyazov died in 2006, criminal charges were brought against the chairman of the Mejlis, and the head of state’s duties were instead assumed by deputy prime minister Gurbanguly Berdymukhamedov, who was then elected president in 2007.

According to the proposed constitutional amendments, in the event of the president’s serious illness, his duties are to be performed by the head of the Halq Maslahaty. The chairperson of the Halq Maslahaty (as, too, the head of the Mejlis) is to be elected by secret ballot. Members (and thus also the chairperson) of the Halk Maslahaty cannot simultaneously be government ministers, hyakims (heads of regional administrations), archins (heads of local government agencies), judges or state prosecutors. Previously, these restrictions held only for members of the Mejlis.

The Halk Maslahaty played an important role in the country under Niyazov. It was this organ that ratified all of the president’s eccentric decisions (such as the renaming of the months of the year and the days of the week). Under Berdymukhamedov, the Halk Maslahaty was abolished. In its place, the Yashuli Maslahaty (Council of Elders) was created, which had no significant influence on the country’s political life. In the autumn of 2018, the Halk Maslahaty was resurrected. In the course of its first annual convention, the newly-revived council took the decision to abolish the vast Niyazov-era subsidies which made gas, water and electricity practically free of charge for Turkmen citizens.

At the second convention of the Halk Maslahaty in the autumn of 2019, Berdymukhamedov announced plans to unite the organ and the Mejlis to form a new bi-cameral parliament. Observers suggest that the constitutional amendments are related to plans for a future transfer of power in Turkmenistan. According to the most widely-accepted scenario, the 62-year-old Berdymukhamedov’s successor will be his son Serdar. In June 2019, he was appointed to the position of hyakim of the Akhal region, adjacent to Ashgabat and the home territory of the ruling Akhal-Teke clan. At the same time, construction was begun on a new regional capital in the Akhal region, which, on the orders of the president, was to equal Ashgabat in terms of architectural splendour. In February, Berdymukhamedov unexpectedly removed Serdar from the post of hyakim and appointed him head of the Ministry of Industry and Construction. In this role, he is to oversee the new city’s construction.