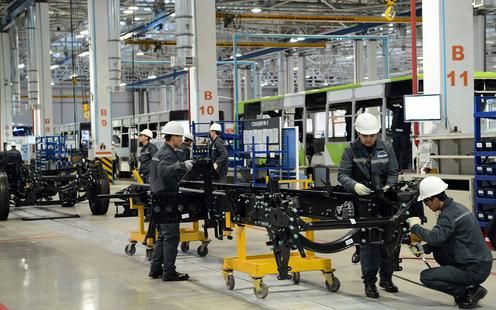 Over the coming five years, the government of Uzbekistan plans to raise the country’s GDP to $100 billion, President Shavkat Mirziyoyev announced at a joint session of parliament on 21 January, Gazeta.uz reports (in Russian).

The president mentioned that the country’s GDP has grown from $44bn to $58bn over the last two years and said that there is “every chance” of almost doubling this figure. “We calculated everything a hundred times,” Mirziyoyev assured his audience. He cited the experience of other countries: “Our neighbours – you know which neighbours I am talking about – have attained a GDP of $180bn since independence” (A glance at a list of countries by GDP would suggest that Mirziyoyev was talking about Kazakhstan – Fergana).

According to the president’s plans, over the next five years the country will need to increase the annual flow of foreign direct investment into the country to $10bn and raise exports to $30bn (in 2019 Uzbekistan exported $17.9bn of goods and services), while reducing inflation to 5%. The day before, the head of state declared that a minimum of $50bn is required to stabilise the country’s economy.

During his speech to the two chambers of parliament, Mirziyoyev subjected a number of branches of the country’s economy to criticism. In particular, he accused the fuel and energy sector of being “sunk in corruption”, and said that the transport sector “has not made the slightest step forward” and that there were problems in the construction and water-supply branches.

On the subject of agriculture, the president said: “Now the concept of clusters has entered into our mindset. True, we are still in the early stages. Due to a lack of on-site inspection, many clusters – 3, 4, 5, 10, 20% – resort to corruption. Because they still don’t believe that they can do everything through the banks. They still have the old mentality. They think: ‘If I steal funds and give 20% to some official, then I can sleep soundly at night...’ That’s our mindset, and we won’t go far with it,” Mirziyoyev stated.

He referred to plans to abandon the system of public procurement for wheat and cotton by 2030. “People might not be ready for this, but if we don’t take steps to gradually transition then there will never be any interest in doing so. It will remain supported by the government and nothing will happen,” the president said.