War is over, let the battle begin

23 years since the signing of the peace agreement between the government and the United Tajik Opposition, true reconciliation seems as far away as ever 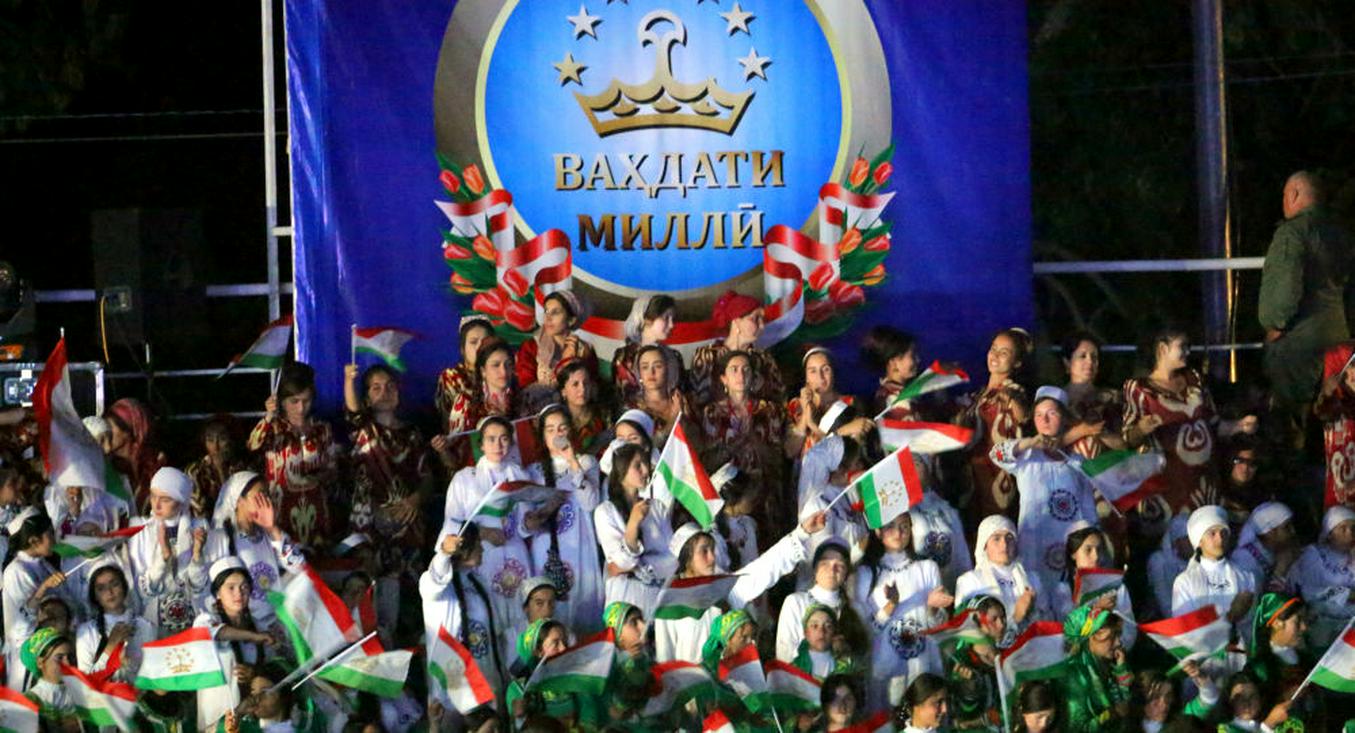 Celebrations for Tajikistan’s National Unity Day. Archive photo from the Press Office of the President of Tajikistan

On 27 June, Tajikistan celebrated its National Unity Day. Each year the event is marked with great fanfare – complete with fireworks, theatrical performances, concerts, fairs and other events. On this day back in 1997, the General Agreement on the Establishment of Peace and National Accord was signed by the government and the United Tajik Opposition (UTO) in Moscow. The document signalled the end of the country’s five-year civil war.

The conflict between supporters of the official government and those of the democratic Islamic opposition began in the spring of 1992 with competing demonstrations on two of Dushanbe’s central squares – Shahidon and Ozodi. The first bloodshed occurred in May. Clashes in the capital then spread to other regions around the country. In the first months of the war alone, before November 1992 – when then-president Rahmon Nabiev stepped down and Emomali Rahom (then Rahmonov) was elected head of the Supreme Soviet in his stead – on various estimates between 20,000 and 50,000 people were killed (the total number of victims of the war, according to official figures, was more than 150,000). Under the aegis of the UN, lengthy negotiations began between the two warring parties. Meetings between the two sides took place in Moscow, Kabul, Tehran, Bishkek, Almaty and elsewhere. Nine rounds of talks were held in total, plus another six personal meetings between Rahmon and the now-deceased leader of the UTO, Said Abdullo Nuri. 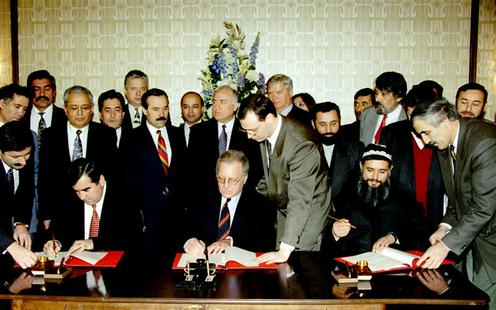 After signing the peace agreement in June 1997, the UTO’s armed forces were reintegrated into the Tajik army. The Islamic Renaissance Party of Tajikistan (IRPT), essentially the backbone of the UTO, was legalised as a political party. Under the terms of the agreement, the opposition obtained three posts in government. The two sides resolved to forgive one another and to renounce mutual recriminations, accusations and reprisals. On all major occasions in those years it was repeated that the inter-Tajik war had had no winners and no losers, and the steps taken to resolve the conflict were described as unprecedented.

Over the following years, the situation changed. In September 2015, the IRPT was accused of lying behind an armed uprising staged by then-defence minister Abduhalim Nazarzoda. The Supreme Court of Tajikistan declared the party a terrorist-extremist organisation and it was banned inside the country. Following this, official media began speaking only of its destructive role in the civil war, accusing it of initiating the conflict. At the same time, the title of “Founder of Peace and National Unity, Leader of the Nation” was bestowed upon Emomali Rahmon by law.

Fergana decided to ask a number of Tajiks what memories National Unity Day conjures up for them and whether they personally choose to celebrate the occasion today.

– Life was difficult for us during the war. Our children were still small and we were always worried about them, there was not always enough food and we had no money. At the start of the 1990s I was working as an actress at the youth theatre and my salary was only enough for tea, sugar and bread. It was a huge effort to get hold of bread – you had to stand in queues for hours. By the time the end of the war was announced, I was already working as a journalist for the Tajik service of the BBC and was studying English at a summer school in London. Both I and all my relatives were very happy, we had all been waiting for this day, because now there was hope for a new, peaceful life. I called my family back home and congratulated them – everyone was overjoyed at finally achieving peace in Tajikistan. But now there is a feeling that we are right back in the same dangerous situation that divided Tajik society back then.

Shodavlat Shonusayrev worked for the information and analysis office of the United Nations Mission of Observers in Tajikistan (UNMOT) between 1994 and 2000:

– 27 June was a normal working day for us. UN agencies acted as mediators in talks between the opposing sides. We were kept informed about the whole negotiations process and already knew that Nuri and Rahmon were going to sign a peace agreement in Moscow. So for us what happened was no surprise. But it took us a long time to reach that day. Now every year on this day I remember the first special envoy of the UN Secretary-General in the country, Livia Bota. It was he who first started to set the bases for reconciliation between the two opposing sides. 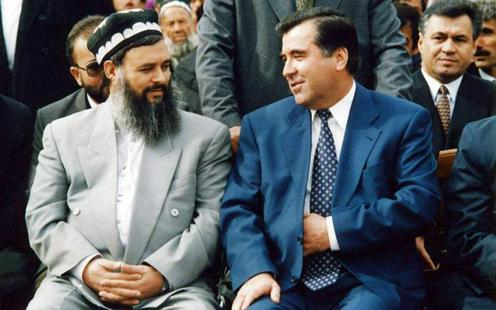 He first arrived in Tajikistan at the start of 1993 and worked as head of the UN mission until 1995. He set up a solid UN operation in Tajikistan, created a strong team of UNMOT staff, travelled all around the country and met with people, familiarised himself with the situation. It was Livia Bota who laid the foundations for the negotiations process between the government and the opposition. It was thanks to him that the first round of peace talks in Moscow took place. He was the one who created the conditions for the first opposition representatives to travel to Dushanbe in order to work in the joint commission to achieve a ceasefire.

Oynihol Bobonazarova is a well-known human rights advocate and social activist. During the civil war, she suffered for her convictions. In the autumn of 1993, she spent two months in detention on treason charge and was released only following intervention on the part of the international community.

– That day in June was a moment of huge importance. I was very overjoyed on hearing of the reconciliation agreement: finally, I thought, peace will come to our poor, tormented land. I was not invited to the reconciliation day celebrations by either the government or the opposition, even though, as a member of the Democratic Party, I had been a “prisoner of conscience” during the war. After I was released from detention, I remained on a list of people barred from leaving the country for almost three years. In January 1996, the President pardoned me by decree, but I don’t consider this decree legitimate, since pardons should only be applied to people who have been sentenced by a court of law, and in my case there was no court process. Nor were those who were guilty of unlawfully arresting me punished in any way.

But in June 1997, we all thought only of peace – that now justice will be reinstated and everyone will find their place in the socio-political life of Tajikistan. I remember how one highly-placed official, who occupied a key role at that time, told me that the peace deal was simply a trap for the opposition. Unfortunately he was right. As we can see now, there was no true reconciliation, and this holiday has lost all meaning.

– Like any sound-minded citizen of our country who lived through that horrendous war, of course I was glad that the peace agreement was signed. For us it meant the end of a war that had dragged on for five years – no small amount of time. This was almost as long as the Second World War. But after a few years, peace turned into a myth, as was perhaps to be expected. After this I stopped celebrating the occasion, because celebrating it would mean supporting the myth, the lies and the distortion of the events of those days, which were later turned into a kind of cheap grotesque, the victory of one giant over a host of monsters – the victory, essentially, of Kim Il-sungism. In my opinion, today this “holiday” is nothing but a shameful embarrassment. It should be done away with in the same shameful way in which it is celebrated. It is a stupid and futile waste of vast sums of money for no obvious reason. Or rather, the reason is obvious, but it is one that should really have us asking: why? Our country is drowning in baseness and vulgarity. Why add more, when there is so much already? 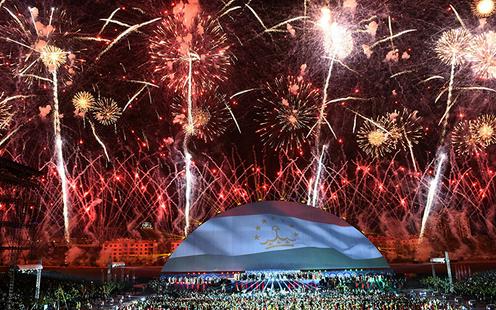 Fireworks to mark National Unity Day. Archive photo from the Press Office of the President of Tajikistan

Anvar Sadullaev, is a middle-ranking official in government agency:

– Every year I get invited to celebrate National Unity Day. My colleagues and I go together and I always have a good time. I was 15 years old when the war ended. My father fought for the Popular Front and I’m very proud of him. Because thanks to him and others like him, we live in a time of peace and harmony. I remember how, once, when I was small, we had no bread left in our house in Kulyab. My mother said that we were surrounded on all sides by the enemy and we would have to be strong and patient. And I and my younger brothers and sisters were patient. I’m glad that we had heroes fighting for peace in this country. I fully and totally support the government and our president, because they do a lot for our country, and only a blind person would deny this.

Madina Safarova, owns a clothing store in the centre of Dushanbe:

– The end of the war was a huge relief – finally this nightmare, this lawlessness had come to an end. At the start of the war I was working as a teacher at one of the capital’s universities, but there was very little money to go around. In fact we were paid nothing, and I needed to earn money to help support my parents, my brothers and my sisters. So I went to work in a private store. I had no idea that it would be so bad.

When the war came, soldiers were constantly coming into the store and taking whatever they wanted, without asking and without paying. At first we tried to demand some money, but they threatened and insulted us. They had guns so we kept quiet and just prayed that they would take what they wanted and leave as soon as possible. So for me news of the peace deal was a cause for real joy. There was a hope that now everything would get back in order. Lawlessness on the part of the soldiers continued for a period, but was much less frequent. And it soon became possible to make complaints and many were punished. Maybe there were higher hopes back then for national reconciliation, but at least there is no war, people are not being killed – and this alone is a cause to be glad for those of us who survived this war.

Note: For those who can understand Tajik (and even to some extent for those who do not, given the atmospheric, demonising tone of the programme) it may be of interest in this connection to watch a recent 3-part documentary produced by Tajik state TV on the role of the opposition in the civil war and after. IRPT leader Muhiddin Kabiri has denounced the documentary as an example of the government’s immoral “information war” against the Tajik opposition and of Emomali Rahmon “removing the mask” of his pretence of being the founder of true peace and reconciliation.