What Uzbek hotels should offer foreign visitors each morning 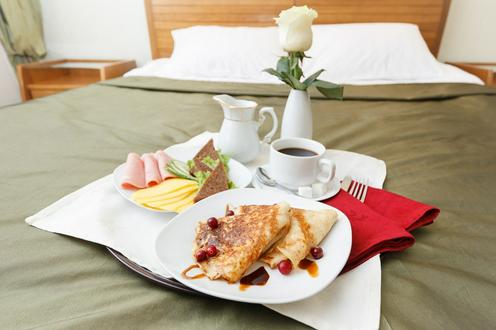 A breakfast served in one Uzbek hotel. Photo from Booking.com

A popular saying, attributed to General Suvorov, runs as follows: “Eat up all your breakfast yourself, share your lunch with a friend, and give your dinner to your enemy”. Many nutritionists agree with this idea, and consider the morning meal the most important one of all. Breakfast is especially important for travellers, who need to get their day off to a good start and load up on energy in preparation for the long schedule of sightseeing and souvenir-hunting ahead. Not only this, it is precisely while eating breakfast that a tourist forms his or her first impression of the level of service and the hospitality of the country they are visiting.

In today’s tourism industry, it is common practice to include breakfast in the cost of a hotel room. Such a service is provided not only by hotels with three stars and above, but also by hostels. Each establishment will offer a selection of food based upon its own resources and on the opulence of its guests – some will offer champagne and caviar, and others will limit themselves to a couple of slices of toast and a cup of coffee.

Uzbekistan, aiming to establish itself as the tourist hub of Central Asia, has taken a serious look at the question. At the start of last year, the country’s Association of Cooks set out a standard national breakfast for tourists. Experts included on the menu kaymak (a dairy product akin to thick cream or soft butter), traditional Uzbek flatbreads, samsas, seasonal fruits and vegetables, navat (a chewy sweet made from grape juice and syrup), nuts, dried fruits and traditional desserts. And of course tea. The resulting meal packs quite a calorie punch. A real breakfast fit for a champ, you could say... 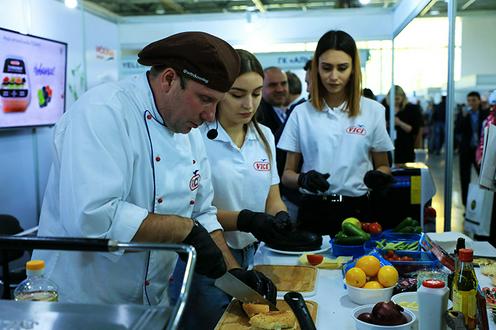 Contestants in the competition “Delicious Uzbekistan”. Photo from the press office of Uzbektourism

On the subject of champs, last week the international culinary contest “Lazzatli O’zbekiston” (“Delicious Uzbekistan”) took place in Tashkent. Included in the program was a competition for the best ethno-breakfast, in which contestants from six countries plus Karakalpakstan (an autonomous republic within Uzbekistan) presented their own special creations to a jury. Besides the dish itself, contestants were awarded marks for presentation and style. Highlights here were the Algerians, who served their dishes on gilded plates, and the hosts, who used chinaware decorated with national patterns on a traditional dastarkhan tablecloth lined with satin. The cooks gave it everything they had, though sometimes this proved a little too much – the jury was forced to declare the Mongolian menu too filling, glutting the appetite for the rest of the day. In the end only the Mongolians and the representatives of Karakalpakstan went home empty-handed. The bronze medal was shared by India and Rumania, and the silver by the Kazakhs and the Algerians. The winner was the ethno-breakfast from Uzbekistan, notable for the fact that its variety meant it could satisfy both meat eaters and vegetarians. Yet another plus point for the national standard.

The search for the ideal menu

As mentioned above, the Association of Cooks of Uzbekistan has proposed its version of a standard national breakfast. Fergana decided to find out what the public thought on the matter, and conducted a survey on Facebook, asking readers to describe their vision of an “Uzbek breakfast” for foreign tourists. The results showed that the profs got it spot on. The majority of respondents mentioned among their suggestions the traditional hot flatbread, green tea, navat, kaymak and fruit. The samsa didn’t make it into the mix, many considering it too filling for a morning meal. There were suggestions to diversify the selection by adding something more original, for example by replacing ordinary tea with shirchoy (a Tajik beverage, essentially consisting of tea with milk). Or by adding a skewer of traditional minced meat (kiyma) shashlik. Admittedly, as one person pointed out, this sounded less like a breakfast suggestion for foreign tourists in Uzbekistan than the wistful daydream of the expat Uzbek...

Some survey participants suggested making the Swedish smörgåsbord a standard in Uzbek hotels, so that the guests themselves can choose the breakfast they prefer. Indeed, many thought it would be a good idea to supplement the national cuisine with European and Asian dishes. After all, the inexperienced and unwitting tourist can easily underestimate the amount of fat they are ingesting and be forced to spend the whole day stuck in in their hotel room... 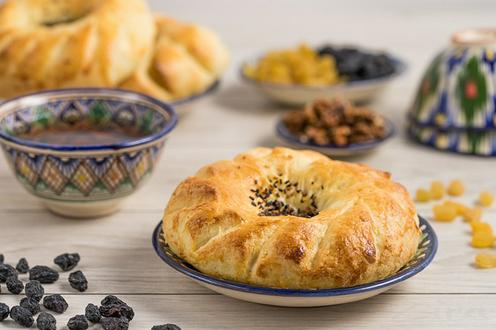 Our readers also highlighted the importance of the time of year. Suggestions were made to create seasonal “Uzbek breakfasts” for summer and for winter. “Shirchoy, hot patyr (a flakier version of the traditional flatbread – ed.), butter or kaymak, dried fruits and halva for the winter; and green tea, hot patyr, kaymak or suzma (strained yoghurt – ed.), fresh fruits and melon for summer,” suggested Phiruza Khaybullina.

Another argument raised against a nationwide standard is the sheer diversity of Uzbek cuisine. In this respect the country is like a patchwork – each region has its own culinary particularities. “I love the breakfasts at some of the hotels in Karshi. There you can get hot meat smoked with conifer wood :)”, wrote respondent Nodir Yu, for example. It’s unlikely Europeans have experienced such a calorie-heavy breakfast before. But in the Kashkadarya region they find the concept of a table without meat unimaginable.

All these ideas, surely, are worthy of consideration, and the Committee for Tourism Development would do well to listen to them as it works to introduce a single standard breakfast.

The Uzbek government is actively seeking to develop various forms of tourism, including culinary tourism. In this sphere the country has every chance to excel.

“Uzbek cuisine, in my opinion, is one of the most delicious. Plov, shashlik, manti, samsas – these are all wonderful dishes. Especially if they are home-made or served in small cafés. Another indisputable plus is that Uzbek food is not expensive. For the same money that you’d pay for a meal for one in Moscow, you can feed a small party in Uzbekistan! And this is one reason why tourists love to come to Uzbekistan,” said the Moscow videoblogger Denis Govorukhin, creator of the collection of travel videos Goroda Pobrodimy (Wandering Cities, available in Russian on youtube).

On the subject of hotel breakfasts, however, Govorukhin’s feelings are more mixed: “The most commonly found dishes are too heavy to eat at breakfast. For me, all I really want is a nice tea, maybe a little bread with some tasty jam. Because I know that in this part of the world the lunch and dinner will be very filling. The best thing is when they bring you a fresh, piping hot flatbread – then you know the owners really care. But if they just leave a bit of stale bread and a not-especially-tempting piece of sausage on the table, it’s not exactly the best start to the day.” 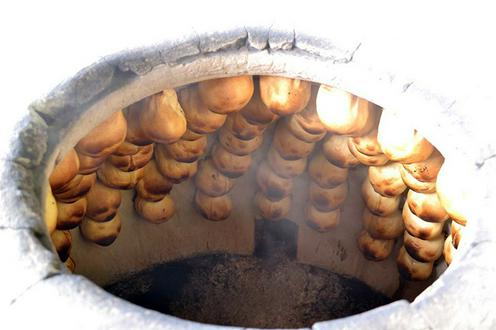 For now, while they are not forced to adhere to a single standard, Uzbek hotels are free to serve their guests as they like. Fergana’s reporters decided to visit a number of hotels in the main tourist hotspots and compare their complimentary breakfasts.

In Tashkent we put to the test some of the top establishments on the hotel reservation site Booking.com: Wyndham, City Palace, Radisson, Shodlik Palace Hotel. Generally breakfast in the capital’s hotels starts at 6am and continues until 11am. Normally they offer guests either a Swedish smörgåsbord or a room service breakfast. The tables positively bow under the weight of the abundance of dishes on offer: meat and fish courses, breads and pastries, various dairy products. On average the menu includes as many as six hot dishes. And, of course, there is a separate table for fruit and dried fruits. In the hotels of the capital, however, they rarely include traditional local fare – occasionally you can find Uzbek pastries and halva, and among the bakery products you might catch sight of a samsa. For an extra charge, though, guests can be served any traditional dish they like from the hotel restaurant menu. Some hotels offer some nice free bonuses. At the Wyndham, for example, they have freshly-squeezed juice, and at the Shodlik guests can use the coffee machine. 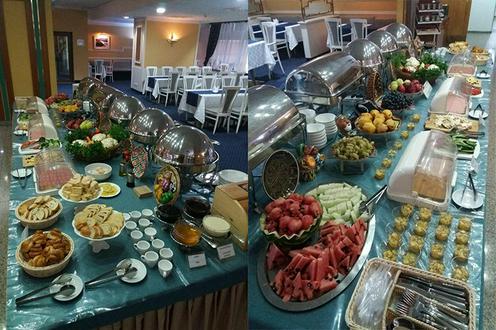 Swedish smörgåsbord for breakfast at the Shodlik. Photo by Andrey Kudryashov, Fergana

At bottom, the menus are set by the laws of supply and demand. According to chefs there is almost no demand for local foods in the mornings. “It’s very rare to meet a guest who asks for plov. They consider it unhealthy and far too calorie-rich for the morning,” they point out in the restaurant of the Shodlik Palace Hotel.

In hotels in Bukhara, a Swedish smörgåsbord might include porridge, croissants or scrambled eggs, as well as dishes more to the taste of local residents. In Shohtut hotel, for example, located a two-minute walk from the Lyab-i Hauz in the old town, they serve traditional home-made kaymak, and flatbread with quince and ginger jam. For those possessed of a sweet tooth they offer local varieties of honey produced from the flowers of cotton and camelthorn. On request they can prepare home-made samsas for breakfast or tukhum barak (dumplings made with unleavened dough and an omelette filling).

The situation is similar in Samarkand. There tourists generally prefer to stay in hostels. Amir Hostel is one with a particularly good reputation among travellers, among other things for its filling breakfasts. There they serve porridge, eggs, local desserts, hot Samarkand flatbreads straight from the tandyr, sweet tea and seasonal fruits.

The Uzbek breakfast, of course, is an idea worth pursuing. If for nothing else than so that hotel and guesthouse owners don’t serve tourists a piece of yesterday’s sausage and some stale bread. All the same, the introduction of a single standard option seems to be overkill. The best way forward, as always, is to find the golden mean. A few different versions of the morning menu could be devised, and then demand will show which one of them is the most popular. Both actors in the tourist industry and tourists themselves have to be free to choose. But the main conclusion of this culinary encounter – Uzbek cuisine can prove a big draw for tourists with its originality, its quality and its affordable prices.