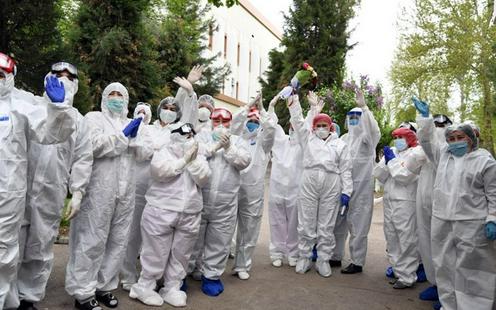 Medical staff wave off recovered and discharged COVID-19 patients. Photo from the press office of the Uzbek health ministry

Uzbekistan will no longer hospitalise asymptomatic COVID-19 patients and those with light forms of the illness but instead simply require them to self-isolate at home. Uzbek president Shavkat Mirziyoyev ordered the change in treatment protocol at a government meeting yesterday.

Until now, all individuals who return positive COVID-19 tests have been hospitalised. Even those who have fully recovered from the virus – as well as medical personnel who have treated coronavirus patients – have been kept under observation in hospital for a further 14 day period, though at the end of last week the Uzbek health ministry said that this practice had been discontinued. “Experience has shown that this rehabilitation period is not necessary. We have been placing patients who have fully recovered from the virus in a 14-day course of rehabilitation, but there have been no repeat infections during this period,” the health ministry stated, adding that such a method has been applied “only in Uzbekistan, as a precautionary measure”.

During the same statement, noting that such a practice is not followed “even in developed countries”, the health ministry went on to note: “There, people who have been infected with the coronavirus are hospitalised only in severe cases, in all other cases patients are recommended to take the necessary medication and are told to recover at home.”

It seems probably, however, that it is not simply empirical experience or the example of “developed countries” that has brought about the change in methods, but a combination of increased testing and the likelihood of rising caseloads and an increasing need to preserve hospital capacity. This and the example of neighbouring Kazakhstan, which has adopted similar strategies since the start of the pandemic and already found itself in a similar situation. Over a month ago Kazakhstan began a transition to the same practice of home quarantine for asymptomatic or mild cases, following a rise in prophylactic testing (systematic screening of certain groups even in the absence of symptoms, such as workers at certain industrial sites) and increasing numbers of asymptomatic cases.

Kazakhstan has since opted to exclude asymptomatic cases from its overall statistics. Despite this, cases continue to rise, with daily symptomatic infection numbers (around 30-40% of all detected infections) almost reaching the level of combined symptomatic and asymptomatic cases before the switch in measuring methodology. Kazakhstan’s deputy health minister yesterday assured the public that the country’s hospitals have sufficient reserves of hospital beds. Today, however, the Nur-Sultan municipal authorities stated that 90% of the city’s hospital bed capacity is in use and warned that beds and doctors would soon be insufficient to cope with demand “if members of the public continue to act so carelessly”. This morning, Kazakh MPs appealed to the country’s prime minister to re-introduce sharpened nationwide lockdown measures. Deputies said that they have been receiving complaints from around the country of hospitals turning patients away and overfull temporary hospitals.

According to official data, the situation in Uzbekistan is far less acute than that in its northern neighbour, though in the same session Mirziyoyev too pointed to a worsening spread situation. While the majority of Uzbekistan’s daily new cases have generally come from among those tested in quarantine facilities or because they have been in close contact with confirmed cases, 888 cases over the last two weeks have come from among the rest of the population, including 482 of 551 cases in Tashkent.

“Everything suggests that the situation with the coronavirus is taking on a more difficult character,” Mirziyoyev said. “The time has come for a significant strengthening of vigilance and responsibility in the fight against the pandemic. In the present stage we have a duty to strictly observe lockdown regulations, however difficult this may be. Each of us must carry out our work with caution, carefully thinking through the consequences, deeply conscious of our responsibility not only to ourselves, but also to our families and children. Otherwise all our hard work could be in vain.”

Mirziyoyev also called on the special commission in charge of fighting the coronavirus to regularly test workers at companies, markets and organisations that are now resuming operations after the lockdown. It is unclear exactly how widely this is being carried out, but Uzbekistan’s official coronavirus channel on Telegram today announced that nearly one million tests have been conducted in the country in total, suggesting a significant rise (perhaps as much as a doubling in total tests) in the last 2-3 weeks.
Unlike in Kazakhstan, no systematic information is available about asymptomatic cases, though Chief Medical Officer Nurmat Otabekov has previously stated that almost 80% of cases are asymptomatic.