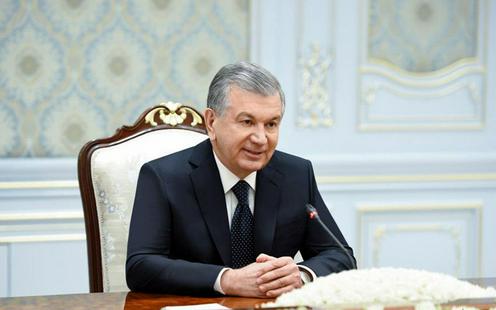 Shavkat Mirziyoyev . Photo from the Press Office of the President of Uzbekistan

A new Anti-Corruption Agency has been set up in Uzbekistan. The agency will be placed under the authority of the presidential administration and report to the upper and lower chambers of the country’s Oliy Majlis (parliament), it was originally reported on 29 June.

Uzbek president Shavkat Mirziyoyev signalled the creation of such an agency back in January this year. In May, in contrast to the present arrangement, Uzbekistan’s prosecutor-general Nigmatulla Yo’ldashev stated that the new organ “will not be under the authority of any state department or parliament or the presidency, but should be an independent entity». According to him, such an arrangement would comply with the principle of checks and balances in state administration and would have a positive impact on the independence of the judicial system. “We need to move from petty corruption to the investigation of elite corruption,” the state prosecutor said. “If we reach up to the top level and prevent elite corruption then we will also get rid of petty corruption lower down.”

The new agency will be charged with formulating and implementing the government’s policy in the sphere of corruption prevention. It is to conduct a comprehensive analysis of the phenomenon in Uzbekistan and study the results of investigations into crimes of corruption. The agency will have the right to request, obtain and investigate materials relating to state budget expenditures, the sale of state assets and state procurement orders, as well as investment and other projects.

The new body will also look into complaints by private individuals and legal entities on issues of corruption and take steps to redress rights violations. It will be able to suspend and cancel the decisions of state organs and officials if it detects signs of corruption.

Uzbekistan was placed 153rd out of 180 countries in the Corruption Perceptions Index published in 2019 by Transparency International. Since he came to power, fighting corruption has been a key plank in Mirziyoyev’s reform platform and “the introduction of effective mechanisms to combat corruption in the system of executive authorities” was included as one of six priority areas in the president’s “Concept of administrative reform” promulgated in September 2017. In 2019, Mirziyoyev approved an anti-corruption programme requiring state organs to carry out corruption risk assessments and draw up lists of employees subject to such risks. Signalling the creation of an anti-corruption agency at the start of this year, Mirziyoyev said: “We must openly acknowledge that entrepreneurs still come up against corruption in such areas as the acquisition of land plots, in cadastral, customs and banking services, in licensing, and in state procurement orders. This is also clear from numerous direct appeals to me as president and statements in the press and on social media.”

In other administrative reform news over the last few weeks, the Uzbek parliament has drawn up legal amendments requiring state officials to personally respond to deputies’ and senators’ interpellations. The existing law does not stipulate a personal appearance on the part of officials, meaning that senior officials usually send their deputies or other subordinates to reply in their stead.

Moves have been made recently to raise the profile of the Uzbek parliament, the Oliy Majlis, which plays a predominantly decorative role in the country’s politics, ratifying legislative proposal put forward by government agencies and ministries. Mirziyoyev has urged deputies to take a more active role in instigating draft laws, and since 2019 it has been standard practice for the head of state only to confirm the appointment of ministers, deputy prime ministers and committee heads after their approval by parliament.

On 1 July, Mirziyoyev also ordered a number of changes to be made to the country’s courts system in order to bring it into line with internationally accepted standards. According to the president’s proposals, individual courts will no longer be permitted to perform functions which are normally distributed over separate judicial instances, which can lead to situations where courts end up reviewing their own rulings. The European Court of Human Rights has criticised such systems, which can raise doubt about the independence and impartiality of judicial decisions.

Mirziyoyev has urged that all factors affecting judges’ ability to pronounce just rulings be removed, including the right of the president of the Supreme Court and the prosecutor-general to protest. He said that a draft law would be drawn up sharpening penalties for obstructing judges’ work and forcing them to pronounce inequitable rulings.

A series of reforms have been carried out in the Uzbek judicial system in recent years, following which previously-rare acquittals have become more common. Lawyers say that such increasing “lenience” is the result of pressure from international institutions and forced reform from above.

In another move in the sphere of the legal and judicial system, it was announced on 29 June that reviews of Uzbekistan’s criminal, criminal procedure and penal enforcement codes are to be carried out over the course of the next year to boost their conformity with international human rights standards. Changes to the codes have been envisaged by the government’s “road map” for the realisation of the National Strategy on Human Rights.

A revised version of the country’s criminal law code is to guarantee the “rational and proportional” use of alternative forms of punishment and show clemency to first offenders and those who do not pose a significant risk to society, as well as to minors, the elderly, those with disabilities and lone guardians. Those charged under terrorism and corruption offences, however, will continue to be subject to strict punishments. A new draft code is to be ready by 1 May 2021.

A new criminal procedure code is to ensure the right to justice in line with international standards and in accordance with the recommendations of international human rights organisations. The institution of habeas corpus (by which a detainee can demand a review of the legality of their detention) is also to be introduced. The changes are also aimed at ensuring the observance of participants’ rights during trials and promoting the adversarial system. A draft document is to be drawn up by 20 May 2021.

A new penal enforcement code is to focus on strengthening detainees rights in accordance with international standards. Among other things, the road map envisages provisions against the unnecessary use of physical force during searches and guarantees that prisoners’ rights to state pensions contributions will be upheld during their detention. A draft is to be ready by 1 October 2020.

The country’s civil law, labour law, housing and administrative offences codes are also to undergo a review, again with the main novelty being the application of accepted standards of international law, as well as the prevention of discrimination and the active promotion of the usage of IT technologies. One proposed addition to the administrative offences code is the possibility for plaintiffs to terminate legal proceedings.

Five new legal codes are also planned to be drawn up – an environmental code, a healthcare code, a legal code on non-profit NGOs, an entrepreneurial code and an information code.

Finally, the heads of law enforcement agencies in Uzbekistan are to be sent on special human rights courses, and an award “For the defence of human rights” is to be set up for citizens who distinguish themselves in this particular sphere.

As the press office of Uzbekistan’s National Centre for Human Rights explains, the country’s National Strategy for Human Rights is composed of six parts. Its basic aims are the amelioration of national legislation with regard to priority areas of socio-economic development and the observance of international human rights standards, increasing the role of parliament and civil society institutions in the life of the country, strengthening the rule of law, and ensuring that the country rises into the top fifty leading governments in international rankings and indexes in the spheres of human rights and freedoms.

On 22 June, state news channel Uzbekistan 24 devoted a long report to the Strategy, asking a number of experts to give their opinions on the topic. “The National Strategy contains a fundamentally new provision which envisages granting private citizens and legal entities the right to raise issues for consideration by the Constitutional Court. If the rights and interests of citizens are violated on the basis of laws which contradict the constitution, then Uzbek citizens will now be able to file a complaint in the Constitutional Court with a request to review the relevant law’s conformity with the principles and provisions of the constitution. In the case of a lack of conformity, the law or a part of it will be deprived of legal force,” said Deputy Chairman of the Constitutional Court Askar Gafurov.

A draft law on the confirmation of the National Strategy on Human Rights was presented for public discussion in January this year. A number of critical remarks were made. One commentator, Irina Matvienko, pointed out that instead of doing away with pro-government NGOs such as the Women’s Committee, the Youth Union and others, the Strategy bestows on them additional powers. “This document merely increases the number of different institutes and events rather than reducing them and simplifying their management structures. It is not unlikely that various international grants that are applied for and obtained will then end up in the pockets of people close to these organisations or events. Absolutely no mention is made of any steps to develop a true system of open and easily accessible data or to strengthen penalties for the delayed reporting of such data. It is no secret that information transparency is the most important element in the war against corruption. And corruption too is one factor behind the violation of human rights,” Matvienko wrote. Whether officials have taken note of her opinion in the final version of the document is as yet unknown as the text is yet to be published.

Since Shavkat Mirziyoyev became president in 2016, Uzbekistan has set about improving its human rights standing. In 2018, a forum attended by representatives of international human rights organisations, national human rights institutes and field experts was held in Samarkand. The absence of independent human rights advocates, however, dramatically lowered the significance of the event. Similar forums are planned to be held in Uzbekistan every two years, but this year’s event was cancelled on account of the coronavirus pandemic.