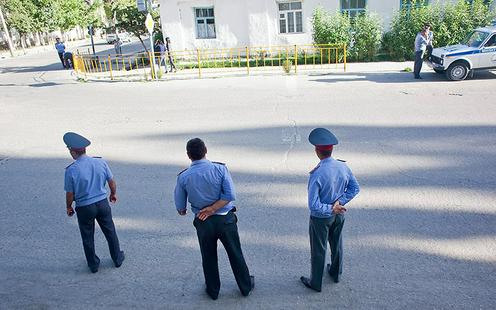 Reinforcements from the ranks of the Tajik interior ministry’s Internal Troops have been sent in to the Rushan district of Tajikistan’s Gorno-Badakhshan Autonomous Region (GBAR), where residents have been resisting the demands of local law enforcement since 24 May. The Internal Troops’ commanding officer, Suhrob Raufzoda, has been dispatched to the area from Dushanbe and is leading negotiations on the surrender of several local residents to the police. The latest developments were reported to Fergana by sources in Rushan.

According to witnesses, in the early hours of 26 May, four pickup trucks carrying Internal Troops soldiers arrived from Dushanbe. OMON (Special Purpose Mobile Unit) officers and Alfa unit special forces have also been called in from Khorugh and Rushan.

Protests by residents in the Rushan district followed the arrest of three young men who had been involved in an altercation with security forces officers. A fight broke out between the young men and officers of the local office of the State Committee for National Security (SCNS) on 22 May after the officers came to arrest local resident Sharof Kobilov, suspected of involvement in the drugs trade. The following day, the young men were arrested, but local residents came out to defend them and forcibly freed them from police custody. It was reported that a local informal leader with the initials E. G. had stood up in the young men’s defence and himself been arrested together with one of his associates. Local residents succeeded in freeing them too from police custody.

Tajik law enforcement are currently demanding that locals hand over the young men and E. G., while local residents believe them innocent and are demanding police investigations into them be closed. They claim that the security forces themselves provoked the conflict and that the young men – neighbours of Kobilov – did not understand who they were dealing with, since the officers arrived at the property in plainclothes.

According to information coming out of Rushan, protestors are continuing to gather in the district’s central town, and their numbers are growing. Women, too, are said to have joined the crowd. According to witnesses, the protestors now number more than a thousand. Negotiations between representatives of the local population and the security forces have so far failed to yield any results. Both sides are categorically refusing to accept each other’s terms.

The authorities are insisting on taking the men back into custody and continuing with their investigations, while Rushan residents are refusing to hand them over as they are convinced that they will be subjected to torture and made to sign whatever confessions the law enforcement agencies force upon them.

“These lads were only in the hands of the authorities for a few short hours, but they’ve already been beaten. If they get their hands on them again then they’ll force them to take the blame for what happened, even though they haven’t done anything wrong. That’s why no one is agreeing to hand them over. E. G. commands a great deal of respect and authority not only in the Rushan district but also beyond it. They will do everything they possibly can to defend him. They won’t hand him over,” one source said.

Communications with Rushan remain restricted, with the internet there disconnected. Roads between different districts of the GBAR have been closed – according to the authorities on account of the coronavirus.

In September 2018, Tajik president Emomali Rahmon strongly criticised the GBAR authorities and demanded that they take steps to deal with criminality in the region. The regional governor and heads of the local law enforcement agencies were sacked and replaced. An interdepartmental team was created to establish security and restore order in Gorno-Badakhshan and extra units of the security forces were dispatched to the area. Weapons confiscations began among the local population and additional traffic police posts were set up staffed by officers from the OMON. A year later, in November 2019, the GBAR leadership declared that “law and order have been established” in the region and that crime levels had decreased. During this time, however, a number of incidents occurred between the security forces and local residents, who were unhappy at the presence of additional forces in the region. The local population of course speak different (if related) languages to the central government and follow a different branch of Islam, and have long been used to a high degree of autonomy in their internal affairs.