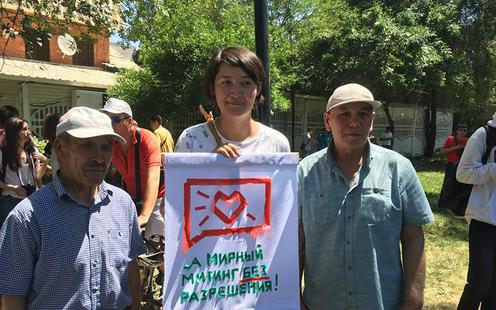 At an authorised demonstration. Photo by Bagdat Asylbek, Fergana

Kazakh president Qasym-Zhomart Toqaev has ratified a number of amendments to the country’s regulations on the organisation and holding of peaceful public assemblies, the website of the Akorda reports (in Russian).

An amended version of the draft law, criticised by rights groups but defended by pro-government experts as a “hybrid model for peaceful assembly, between notification and authorisation systems”, has been subjected to a previous analysis on our website.

According to the new law, every city is to specify designated sites for the holding of peaceful gatherings and demonstrations. Organisers will no longer be required to obtain the local authorities’ permission, they will simply need to inform them of their plans in advance. An event can still be blocked, however, on a number of grounds, calling into question its “notification” character (see below). The law also allows solitary pickets outside of government buildings (though only for a maximum of two hours per day).

“According to article 10 of the draft law, the local executive body, having received notification, will ensure the security of the peaceful assembly. If plans to carry out a peaceful assembly run contrary to the law, the akimat (local authority) may refuse to allow it to be held, but only on the basis of grounds laid out in article 14. In all other cases, the akimat must, if necessary, suggest to the organisers other ways to hold the event, but not cancel it,” parliamentary deputy Kanat Musin had earlier explained.

Article 14 of the draft law referred to by the MP sets out 13 legal reasons for rejecting an application to hold a peaceful assembly. One of them, “impeding the operation of vital public installations, transport and other infrastructure and obstructing the free movement of members of the public”, was removed from the final version at the request of senators since such disturbances should already have been taken into account by the authorities when designating locations for assembly. The remaining grounds include undermining state security, threatening public order and inciting social, racial, ethnic, religious, class or inter-clan discord; if the organisers been previously been found guilty of violating regulations on peaceful assemblies or represent an organisation which has not been registered or has been banned in Kazakhstan; if the event or organisers are funded by individuals convicted of financing terrorism and extremism, or by organisations banned within the country, or by foreign individuals and organisations; or if the number of participants is too great for the designated assembly sites.

As previously noted, this “hybrid” system has been brought in to replace an authorisation system in which the authorities were accused of routinely refusing permission for peaceful demonstrations. Its “notification” character, however, is open to question. Besides the potential for loose interpretations of provisions relating to security, order and discord, the law has been particularly criticised by rights groups for depriving foreigners and unregistered organisations of the possibility to organise demonstrations, as well as effectively banning much of the country’s current activist corps from doing so due to previous public assembly-related convictions.

The other main issue with the previous system was the common practice of the authorities arbitrarily relegating protests to out-of-the-way locations on the outskirts of town. It is unclear how far the specification of designated sites for protests will change this. The original draft law spoke of designating sites “in central and other places”. Kazakh senators have since suggested alterations to this part of the draft law, proposing central sites in each district in a city. But the final text of the law has not yet been published – and final judgement will have to be reserved until the sites themselves are specified in practice. The same of course goes for restriction meeting sizes to these sites’ maximum capacity.