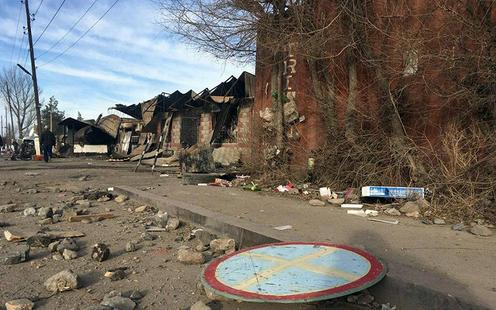 The aftermath of the rioting in Masanchi. Photo by Bagdat Asylbek, Fergana

An official investigation into the inter-ethnic clashes in the Korday district in southern Kazakhstan earlier this year is being carried out in an untransparent and, as far as it is possible to judge, one-sided fashion, according to a report by the Anti-Discrimination Centre “Memorial”, the majority of which is devoted to accounts of the persecution of Dungans in the affected villages.

“As of May 13, 17 of the 25 people arrested or convicted were Dungan. Of these 17, five were already convicted as participants in conflicts that preceded the pogroms,” the rights organisation states.

In particular, on 24 April, the district court in Korday handed down sentences against two Dungans – a father and a son who had been involved in a conflict with a Kazakh family in the village of Sortobe on February 5. The organisation states that this conflict had no connection with the pogroms but was later presented as their cause. The father, Ersman Yunhu, was sentenced to 2 ½ years of restriction of liberty (akin to home arrest) and six months of community service. His son, Marat Yunhu, was given two years in prison. Both were heavily fined and ordered to pay the victims’ legal expenses. The defence has declared the sentence to be unjust and based on false information.

Another three participants in a conflict with the traffic police which also preceded the disorders received 1 ½ years in jail.

“It is still not known if the perpetrators of the murders, injuries, destruction of property, and pillaging have been identified and detained. But it is crystal clear that Dungans are being persecuted: They are providing information about unending violations of their rights, illegal searches, and torture of arrested people in police precincts during interrogations lasting hours (beatings, placement of plastic bags over people’s heads, intimidation),” ADC Memorial writes. “These people are being charged with throwing rocks in an attempt to stop the pogromists and attempts have been made to force them to confess to the serious crime of killing an ethnic Kazakh who actively participated in the pogrom and died (witnesses assert that he killed two Dungans with his car and then drove into gas station [sic]).”

The rights group says that it has in its possession statements submitted to the state prosecutor describing the police’s illegal actions toward the end of April 2020 and photographs of the victims showing evidence of beating and torture. It also claims that those who suffered from the pogroms have still not received any compensation or assistance from the government.

ADC Memorial is an NGO whose work focuses on the rights of minorities. The centre’s staff are engaged in issues of opposing racism, sexism, homophobia and all forms of xenophobia and prepare and publish material on the problem of discrimination.

The disturbances in the Korday district of Kazakhstan’s southern Jambyl region – in an area with a high population of the country’s Dungan ethnic minority – began on the afternoon of 7 February. In the end, 11 people died as a result of the violence, and dozens of others were injured. More than 120 criminal investigations were opened in connection with the rioting, including 11 murder investigations.

During a visit to the Korday district on 1 March, Kazakh president Qasym-Zhomart Toqaev stated that the cause of the disturbances had been a conflict between two criminal groups. The likelihood of a blending of ethnic motives and organised crime in the violence had already been raised by other analysts. (A number of other aspects have been covered in a previously translated article on this site).