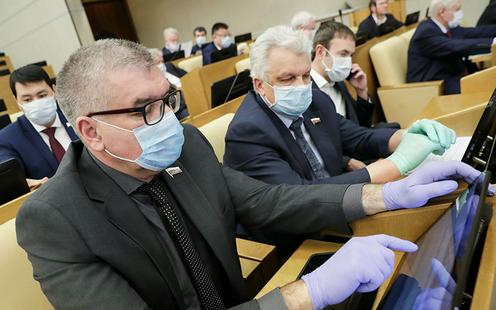 Deputies at a session of the Russian State Duma. Photo from Duma.gov.ru

Foreign nationals who take up Russian citizenship will now be allowed to keep their existing citizenship, according to a new law approved by the State Duma on 17 April (in Russian).

Under existing rules, foreigners applying for a Russian passport are required to provide proof that they have requested the relevant authorities in their home countries to withdraw their existing citizenship.

Applicants for Russian citizenship are also currently required to have lived in Russia for an uninterrupted period of at least five years and have a verifiable source of income. The new law removes this requirement for a number of categories of people: adults without any current citizenship who used to be citizens of the USSR, lived in and still live in states that were members of the USSR and did not receive citizenship from these states; foreign citizens who are married to a citizen of the Russian Federation, live in Russia and have common children in this marriage; and foreign citizens who have at least one parent with Russian citizenship.

The law also grants the right to a simplified citizenship application process to citizens of Moldova, Ukraine, Belorussia and Kazakhstan who have a residence permit in Russia. They will not be required to prove an unbroken five-year residence period in the country. In an explanatory note accompanying the new law, the law’s authors motivate this preferential treatment with reference to the fact that, in these countries, the Russian language “is in official usage and the specified individuals use it in their daily lives”.

For those who have undertaken their studies in Russia, the law reduces the necessary period of employment in the country for prospective citizens from three years to one.

The current legal amendment is part of the Russian government’s plans to attract an additional 5-10 million new citizens into the country.