Still some way to go 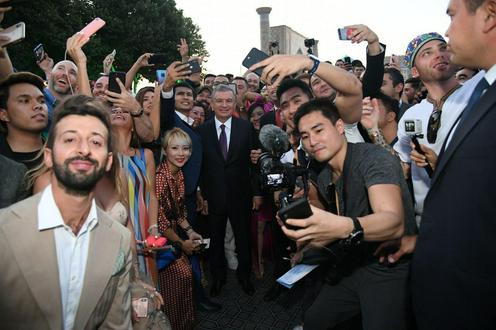 Ten years ago, Russian entrepreneur Yevgeniy Kasperskiy penned an article in which he set out the role of bloggers in the Russian Federation. “Blogs and bloggers have become an integral part of our lives. And now that the President himself has started to run a blog (at the time, Dmitry Medvedev occupied the position of head of state – Fergana), even state officials have discovered that “bloggers are people too”, he wrote.

Uzbek president Shavkat Mirziyoyev, as far as we know, does not run any blogs or social media accounts. But last year he did have his photo taken with a group of famous Uzbek bloggers and allowed them to pose for selfies with him during the opening of the music festival “Shark Taronalari” in Samarkand. And if the head of state himself is starting to interact with independent journalists, for hokims (heads of local adminstrations) of all stripes, paying attention to those whose publications are widely read and commented on by the public has become an absolute necessity. 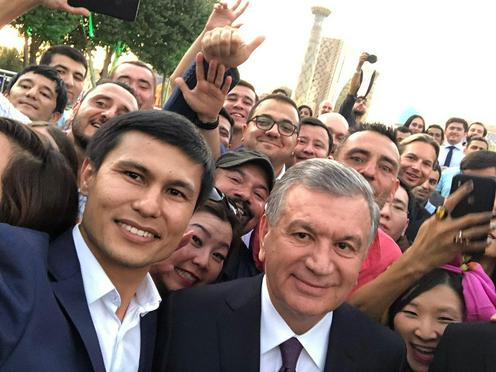 A selfie with bloggers together with Shavkat Mirziyoyev. Photo from Xushnudbek.uz

In fact, even before what the popular Uzbek blogger Khushnudbek Khudoyberdiyev characterised as the “historic” photo of Mirziyoyev together with a group of bloggers, both the public and the authorities had begun to take a significant interest in those private individuals who were using the web to get their message out to a wider audience. Two or three years ago, Facebook and Telegram posts gradually started to emerge as an important medium, becoming first-hand news sources and sparking off investigations and the questioning of parliamentarians and officials.

On 9 March, the administrators of the Telegram channel Potrebitel.uz (“Consumer.uz”) conducted a survey to find out where Uzbeks prefer to get their news. It turned out that the highest number of respondents (385 of those surveyed) got their daily news from social media. This method came out on top by quite a wide margin. In second place came Telegram channels (262), slightly ahead of internet news outlets (235). Television gained only 39 votes and radio and the print press managed only 11 between them. It is worth noting that while private Uzbek television channels still manage to keep afloat thanks to entertainment programmes, Turkish soaps and sports broadcasts, state TV has seen a sharp plunge in popularity, demonstrated by the embarrassing fact that, when a recent technical fault resulted in the interruption of the state TV service for a whole hour, almost no one noticed.

More popular than the media

Fergana spoke to Farida Sharifullina, the administrator of the Facebook group “Tashkent-Snos” (Tashkent Demolitions), and the presenter of the Telegram channel Altman News, Kirill Altman, and asked them for their views on the role of bloggers and blogging in contemporary Uzbekistan.

– How strong is the role of bloggers in contemporary Uzbekistan? Do the authorities pay attention to what they say?

Farida Sharifullina: I think that the role of bloggers in contemporary Uzbekistan is very strong, much stronger than the media, because, after all, they represent the voice of the people. Bloggers are always there in the thick of the action. Any individual who finds themselves caught up in some interesting or alarming situation, or simply watches it from the sidelines, can post a photo, a video or their own personal commentary. On the web, you have the chance to comment on and spread information. Bloggers are not tied to any particular rules or conventions. Unlike journalists, they can write what they want, and, more importantly, how they want. Also unlike journalists, they can express their own opinions and stances, their own emotions. And emotions always have a much more powerful effect. Finally, bloggers, unlike journalists, are not limited by any particular form of expression or by language and they can react faster. The authorities do pay attention to them, of course, because they have an impact – generally a negative one for the authorities. And because the majority of bloggers don’t receive any income from their blogs, so it’s difficult to accuse them of being for hire.

Kirill Altman: Bloggers, journalists and many others in the media have become a real force to be reckoned with in contemporary Uzbekistan. If the authorities don’t always pay attention to them in terms of acting on what they say, I’m 100% sure that they are always monitoring and analysing their activities. Which in itself is recognition of the importance of their work.

A profession or a hobby?

In many countries around the world, blogging is a profession, in other words a form of activity that brings in an income. The earnings of some Instagram and YouTube account owners run into millions of dollars. According to Forbes, for instance, in 2019, the highest earner on YouTube – American Ryan Kadji, who is not even ten years old – racked up $26 million. No one has yet drawn up ratings for Uzbek bloggers, but it is well known that advertisers are actively seeking out the most popular platforms. A good case in point is that of Khushnudbek Khudoyberdiyev, who stated last year that all of the money he receives from advertising on his Telegram channel he uses to pay the tuition fees of students from poor backgrounds. Overall, the blogger has helped more than 60 individuals. Earnings on the Uzbek internet are hardly likely to match up to those on the global level, or even on the Russian one, but Khushnudbek’s actions show that there is money to be made on the web. The State Tax Committee has already attempted to calculate bloggers’ earnings, proposing to tax anyone who places adverts on their accounts. There was even the incident of the arrest of Aziz Ashurbayev, who has an audience of 300,000, who had his phone confiscated and his Instagram password changed by Tax Committee officials. Ultimately, those who targeted Ashurbayev in this way were fired and the State Tax Committee seems now to be leaving bloggers in peace. 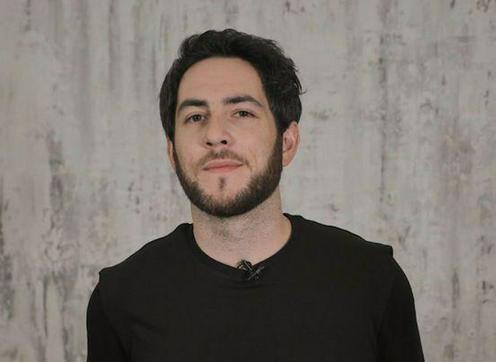 – Is blogging more a hobby for you, or has it become a job that brings in an income?

F.S.: For me personally, the blog is a hobby that has recently turned into something like a job, taking up a lot of my time and energy. But it has not become a real job for me, I don’t get any kind of income from it. Our group strictly forbids any kind of advertising and doesn’t offer any kind of paid services. Nor do we receive any grants.

K.A.: I prefer to call myself more of a journalist than a blogger.

In Russia, legislation related to bloggers was introduced in 2014. The owners of internet sites and accounts with more than 3,000 visitors a day were required to register with Roskomnadzor (the Russian Federal Service for the Supervision of Communications, Information Technology and Mass Media). In essence, popular bloggers were equated with media outlets, with corresponding legal constraints: they must not publish misleading information, ensure that they do not reveal third-party personal data and so on. For this purpose, the regulating body set up a register of active bloggers, listing more than two thousand of them over a three-year period (though independent experts say that the real number of bloggers in the given category is far higher). But following a public backlash, the “law on bloggers” was allowed to expire in 2017.

Last summer in Uzbekistan, the Agency for Information and Mass Communications proposed to give bloggers the same legal rights as journalists (to conduct investigations, direct questions to the authorities and so on). At the same time, drawing on the Russian experience, the proposed draft law set out a number of restrictions. Despite not a small amount of time having passed since then, however, the document is still yet to be ratified.

– Should we legislate on blogging, or would this restrict bloggers’ freedom? Or perhaps extend their rights?

F.S.: In my opinion, there is no need to introduce legislation on bloggers in Uzbekistan, because this would limit their freedom. It’s hardly likely to extend their rights. I think that the general rights and duties currently enshrined in law are sufficient to regulate blogging. I’m talking about regulations banning the spread of slander or calling to violence against particular groups or institutions and sowing any type of discord.

K.A.: As far as I am aware, government agencies that monitor the work of the media are already working on this. I’m not sure it will mean greater limitations in any way. Rather it will make everything clearer.

As the song by Soviet rock band Chizh & Co goes, “And those who love truth are hounded, in their own homeland”. The line resonates with the fears of bloggers in many countries around the world. In Uzbekistan, a whole host of incidents involving bloggers have occurred over the last few years. In 2018, law enforcement agencies simultaneously arrested a dozen frequent social media users writing on religious topics. They were all released after 15 days of administrative detention, some of them having had their beards forcibly shaved off. 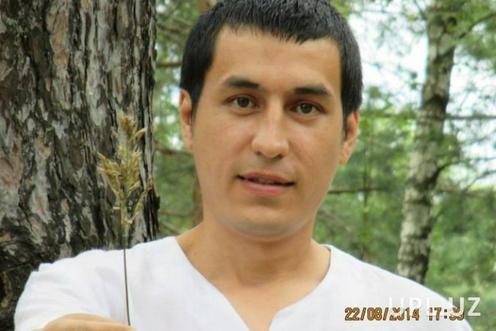 The most high-profile such incident was the arrest of Andijan region blogger Jurabek Kimizov. Officially, he was charged with fraud, but his wife is adamant that the real reason for the charges brought against him were his criticisms of the local administration published on social media.

There have also been instances of bloggers being beaten up. This happened, for instance, to Tashkent resident Otabek Jurayev after he wrote about frauds committed in Samarkand, and to Andijan blogger Otabek Nuritdinov, who criticised the opening of an alcohol store near to a local mosque. Sometimes truth-tellers receive open threats of violence from those in positions of power. And some thuggish hokims have no problem with dealing out “verbal slaps” in front of large crowds.

– These days, many Uzbeks are not scared of raising sensitive issues and criticising the authorities. To what extent do you, as bloggers and as ordinary human beings with the right to free speech, feel safe at present?

F.S.: Different people in Uzbekistan are different: some are scared of raising sensitive issues and criticising the authorities and some are not. Do I feel safe? Well... relatively. The case involving my son is an obvious example. In a flash they can make up anything against you. As for me personally, they use virtual means: on Facebook I am blocked from the page of the State Committee on Ecology and from Saida Mirziyoyeva’s page (while she was head of the Agency for Information and Mass Communications; now she is of little interest). Tashkent hokimiyat have blocked me from their group for citizens’ complaints and the city police department sometimes block me from their page.

K.A.: I have never felt the slightest threat to our project or to me personally. I hope that things will remain this way in the future.

Finally, we asked our interviewees to rate the level of freedom of speech in Uzbekistan on a scale of one to ten.

F.S.: I would rate the level of freedom of speech in today’s Uzbekistan at five or six out of ten. There’s no doubt that things are much better now than under [Uzbekistan’s first president Islam] Karimov. The press in Uzbekistan is much freer now. A lot of sensitive topics are raised and reported on. But the law enforcement agencies didn’t do anything about the Ortyqkhojayev’s “six seconds” declaration [in November an audio recording emerged of Tashkent mayor Jahongir Ortyqkhojayev telling journalists that it would take him only six seconds to make arrangements to have them killed or to ruin their reputations by portraying them as gay]. The detention of the blogger Shabnam in a psychiatric hospital, the arrest and detention of bloggers in Andijan region and elsewhere, the death of a journalist from Khorezm and the release of the driver who ran him over – all of this is extremely concerning.

K.A.: Right now, I think we’re looking at seven out of ten. There’s still some way to go.